February Update: Sick As The Proverbial Dog, But Still Productive
Xan and I have been as sick as we could possibly be with the cold/flu thingy that's going around, spending most of January and all of February so far coughing and feverish. Having no appetite and no interest in leaving the house gave me plenty of time to focus on work, and I've been really productive. While I still can't discuss my current full time project, I can talk about some small jobs I've been able to complete lately.

First, Tom Strong is getting the "Deluxe" treatment this Spring/Summer when Wildstorm collects ten or twelve of the best issues of the series as a deluxe hardcover collection. Editor Kristy Quinn asked me to do a new cover for this collection, and the results are pictured below. I'll post more details about the Deluxe Collection when I have them. 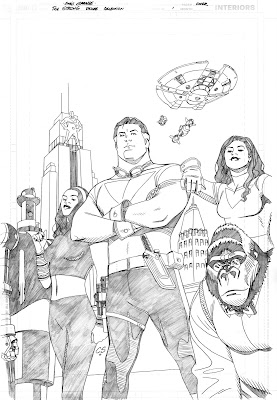 At some point this year, Ocean is also getting collected in a new edition. I don't have too many details on this collection either, but one thing I do know is that it will have supplemental material from both myself and writer Warren Ellis. I provided Kristy Quinn (who's editing this book as well) with every Ocean character design drawing, sketch and unfinished page I could find.

When not working, I've also been busy arranging convention appearances for the rest of the year. In April, it looks like we'll be returning to Toronto for the Toronto ComiCon Fan Appreciation Event on the 18th and 19th. In September, we'll be heading to Spain for a Comics Festival in Aviles--more on that when I have the details. Then in October, it looks like I'll be attending the Mid-Ohio Con here in Columbus again. If you're able to attend any of these shows, come out and say "hi!"

hello chris! big fan here, i was just curious about what you wrote regarding the deluxe version of tom strong. they're going to make a "best of" collection? not the issues in order like they've done for y the last man and ex machina?

I'm pretty sure it'll be consecutive issues, at least the first seven for sure, but I don't have any more facts than you do at this point! Hard to believe, but it's true!
--C

My heart did a little jump at 'deluxe collection' and then sank at 'best of'. Great to hear that'll it'll actually be consecutive issues. Huzzah!

I would love to see the whole series collected,but I can't really see the logic of not packaging the whole series together.
I've been picking up dup copies of all the issues at cons etc and plan to bind them into a hardcover once I have them all.

I'm pretty certain at this point, based on the other Deluxe collections, that the issues will be consecutive. If the other Deluxe books collect consecutive issues, then I'm sure at this point that the Tom Strong collection will as well--why change the format for just one book? Besides, the first dozen issues are considered the best Tom Strong issues by most people anyway, so in the end, I think my mistaken comment won't be so far off the mark. As for collecting the entire series, I think a 36-issue collection is unlikely--even the Showcase books generally don't collect that many comics--but a three-volume Deluxe collection doesn't seem too unweildy. I would personally love a Showcase collection of any series I've worked on--I prefer the art in black and white.