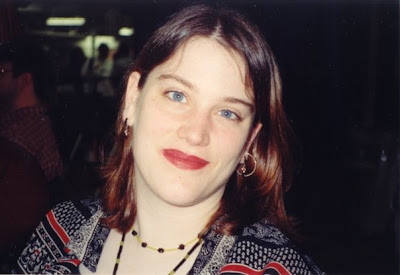 Today is Xan's birthday! We're in Toronto right now, visiting friends and attending a comic convention and I am so exhausted I can barely type. I'll try to get her to write about the trip and I'll post some photos and artwork when we get home. Until then, wish Xan a happy birthday on her Facebook or MySpace page.
--C
Posted by Chris & Xan at 12:08 AM

Hope you had a lot of fun at the con and bought lots of Pez and other cool things.

Just wanted to thank you both again for being so gracious with myself and my friend in Toronto, and particularly for chatting at length about the culinary differences in our countries.

I'm starting to think the "Speed Racer" PEZ was a fever dream, or maybe some sort of bootleg similar-looking type of candy at a Dollarama.

However, I did scope out PEZ for you, Xan, and I found some of the Disney Fairies. Instead of buying them, I thought I'd snap a picture to make sure they were the right variant for you. Their skirt-flower-thingie looks a bit off-blue in the photo, but in real life they were white.

Again, really, thanks so much. You guys were great!

Happy belated birthday, Xan! Hope you had a great day!

It was great seeing you both in Dayton at Gem City. Hope you got the photo I sent.

I wanted to say thanks again for the sketch of Weird Rider, Chris. It's awesome. Also, hope you had a happy birthday, Xan. It was really cool talking with you guys [I'm the friend of 'Johnny Sarcastic']. Next time I'm in the States, I'll make sure to look for Dr. Brown's.