New Project
A couple of people have asked about my current job, so this post is going to focus on that--anyone who doesn't have any interest in comics can skip this post, because it's going to be all about the funnybooks.

I'm working on The Midnighter, with writer Garth Ennis and Karl Story on inks. The Midnighter was created by Warren Ellis, another writer with whom I've done a few projects, and is supposed to be the most lethal man alive. He's previously appeared in Stormwatch and The Authority, both written by Ellis. I will warn anyone who cares about such things that this is probably the most violent book I've worked on(and if you've read Ocean and the WILDC.A.T.S./Aliens book I did with Warren, that's saying something), so it's not one for the kiddies--sorry! I'll post actual pages--the less violent ones--later, but for now, here are some pieces I did in preparation for the series as I tried to get a handle on the character. These probably won't be published anywhere, so it's a SprouseNet exclusive!

By the way--if anyone hasn't noticed already, if you click your mouse on most of the photos/images on this blog, you'll get to see larger versions of the selected image. In the case of the drawings below, the larger versions are almost the same size as the original artwork. 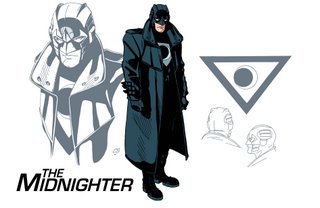 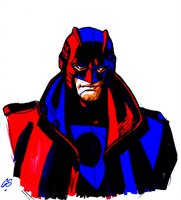 I'm looking forward to seeing what kinds of bone-crunching violence Garth Ennis comes up with for the Midnighter. Should be entertaining.

I picked up an issue of Ex Machina the other day because I thought it was part 2 of your 2 part special. Instead it was issue #21 of the regular series. Not having read any of the previous 20 issues, I didn't get a lot out of it. Oh well.

Next Wednesday I'm going to look for part 2 of your story. And this time I'm actually going to read the cover, and not just glance at the logo.