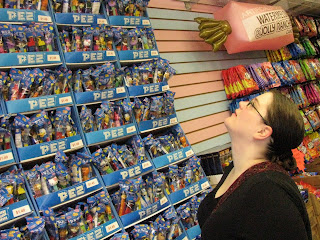 For various reasons, in all my years of collecting Pez (this is Xan writing this first person blog. Hiya.), I've never been able to make it to the Pezamania convention. Since Pezamania is in Independence, Ohio (aka 15 minutes south of downtown Cleveland), getting to one of these conventions doesn't seem like much of a feat, but something always happened to prevent my going. I started collecting around the same time I started college, so the traditional collegiate poverty prevented my going back in the mid 1990s. Yet after this passed, the Pez fates never seemed to be on my side. Wether it was not being able to get the time off of work, other events the same weekend, or the basement flooding, something always got in the way.
I was determined to break this cycle this year. As soon as my office opened up the system to time off requests, I requested the weekend, and once I found I'd been approved started saving money. Nothing says buzz kill like being able to go to a Pez convention, but having it just be window shopping because you didn't financially prepare. Chris reserved the hotel in February, and I registered both of us the same night so we could be registered guests and be part of the festivities. Nothing except possibly another monsoon in the basement was going to prevent this trip. Thankfully, the basement stayed dry and this year for Pezamania 19, I was finally able to attend.
I wasn't sure what to expect from a Pez convention. Would it be full of dealers selling only very rare and expensive dispensers, or people with just the most recent stuff? I was quite pleased to find that Pezamania is both, and everything in between. From the guy with the $.50 recent dispensers to author and well known collector David Welch's ultra rare pieces (he had a Sparefroh with a coin, which in Pez language means $$$$$), this show ran the gamut. I was able to find vintage Pez, find pieces I was missing from newer series, and several foreign series. Not to mention all of the non dispenser Pez related stuff such as the 12" plush and the 12" coin banks. Oh, and handmade crafts from Pez fabric, like a very warm and cozy polar fleece Pez blanket and a handmade Pez tote.
I went Pez insane. And I loved it.
Going to this convention was as fun as my first Motor City Comic Con, which was my first comic convention. It was so much fun to be completely immersed in my hobby, and around people who understand this sickness that is obsessive Pez collecting. So often when I tell people I collect Pez, I get reactions like "They still make Pez?" Chris has gotten similar comments when he tells people he draws comic books, so he knows how much this feels like no one is interested in what I'm interested. I met so many very nice people, including Shawn Peterson and David Welch, who literally wrote the books on Pez collecting. My copy of Shawn Peterson's book is all marked up and dog-eared from constant use and reference. Some of the dealers I met were so much fun, and so were the guests.
The convention was quite different than other toy shows or comic conventions. According to the itinerary provided online by the convention organizers (who were fantastic people and very sweet), Wednesday began registration which continued until Friday, and Thursday and Friday included "Room Hopping". At first I thought this meant that the convention wasn't able to procure a large ballroom, but instead was able to get a few conference rooms. This was not the case. Room Hopping was literally, hopping from hotel room to hotel room. The dealers set up their Pez wares on the beds, desks, and windowsills of their hotel rooms, made signs for their doors which they propped open, and registered guests just hopped from room to room buying stuff. This was quite fun, and gave me a chance to meet and talk to a lot of neat people. While it was a bit cramped in the rooms, Pez isn't very large so even a single room could fit a lot of Pez to browse. And with rooms spread over 2 floors with a room or 2 peppered in on the 3rd and 4th floors, there was plenty to look at. By the end of room hopping on Thursday I was able to purchase exactly what I'd specifically wanted to get at this show and then some. 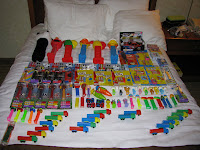 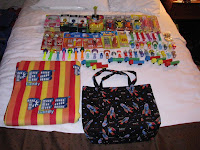 I'm surprised Chris didn't have to come looking for you and find you curled up in a ball, twitching, in a dark back corner of the convention hall,tightly clutching Pez dispensers! ;P

Awesome post! You and Chris have a standing invitation to crash at our place in San Francisco and a promise to take you to the Burlingame Museum of PEZ Memorabilia. Mind you, it's not huge. In fact judging by the photos you might give them a serious run for their money ;-) but it's fun and cool nonetheless...

Nice Totoro dispenser! Would love to get one of each Ghibli character!