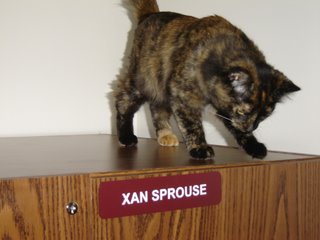 So I finally achieved my lifetime goal of working at home, and I didn't even have to gain 62 pounds to do it!

Medco has set me up with a remote workstation upstairs in the house. So now I do the same thing I did at the office, just in my music room. It is so wonderful I cannot even describe it. It is so much quieter and the day goes by quite quickly.

The system is in a locking cabinet that takes up about as much space as a computer desk. The photo is of the cat trying to get used to it. I unlock it, do my thing, then lock it at the end of the night. And being upstairs means Chris never has to walk by me, making me HIPAA compliant.

To celebrate, I considered buying a mumu, a fat guy hat and a reaching broom, but Chris begged me not to buy a mumu. Maybe I will get a drinking bird, though.

At this time, I have no plans to begin washing myself with a rag on a stick.
Posted by Chris & Xan at 10:53 AM 1 comment:

More Comics Stuff
Here are two of the final three Tom Strong drawings I'll be doing. These are the front and back covers for the 6th Tom Strong Hardcover collection. The front cover may look a little bare, but it'll be composited with a psychedelic photographic background and serve as the basis for a color painting by another artist. The final drawing, which I haven't done yet, will be a new front cover for the 6th and final softcover collection.
--C 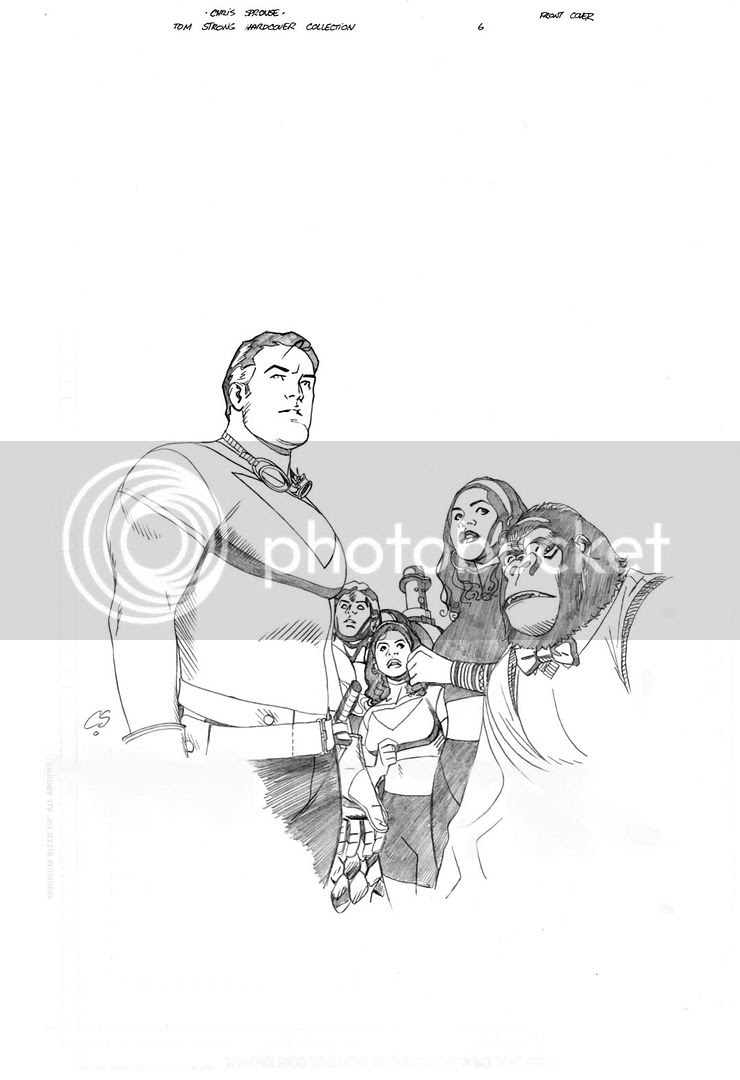 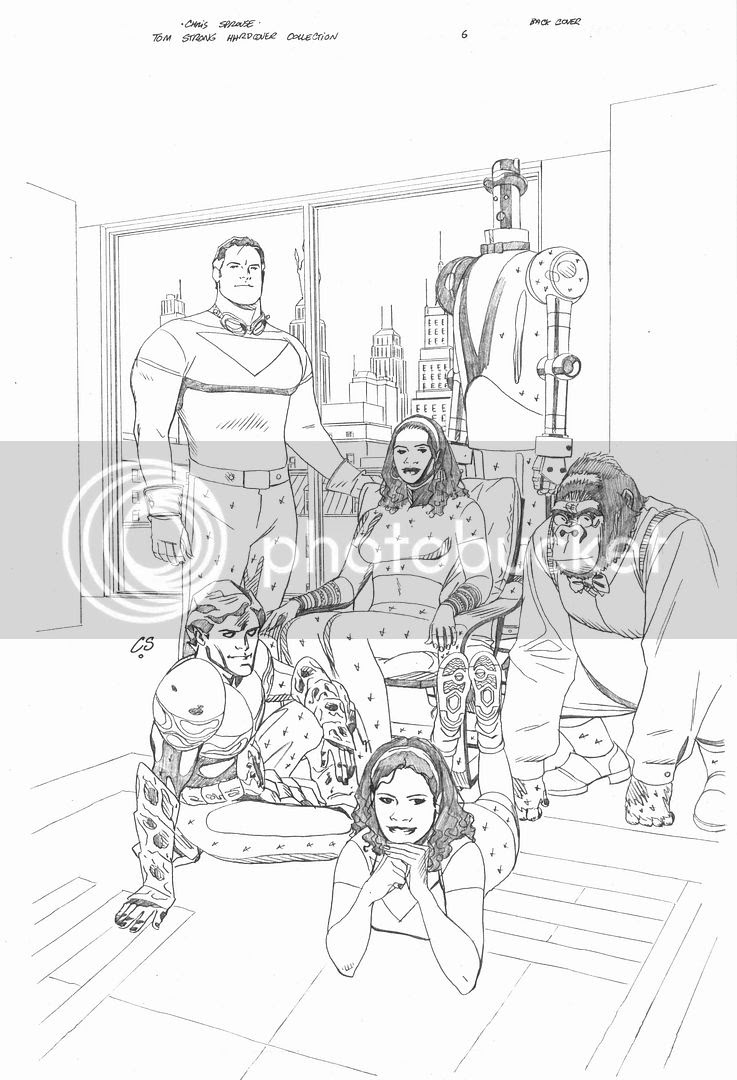 (Remember--you can click on almost any photo or piece of art on this blog and you'll be taken to a larger image than you see here. Roll your mouse over the lower right corner of the new image and a little square icon with arrows will appear. Click on that icon and you'll usually get an even larger version to look at or download!)
Posted by Chris & Xan at 4:17 PM 2 comments: 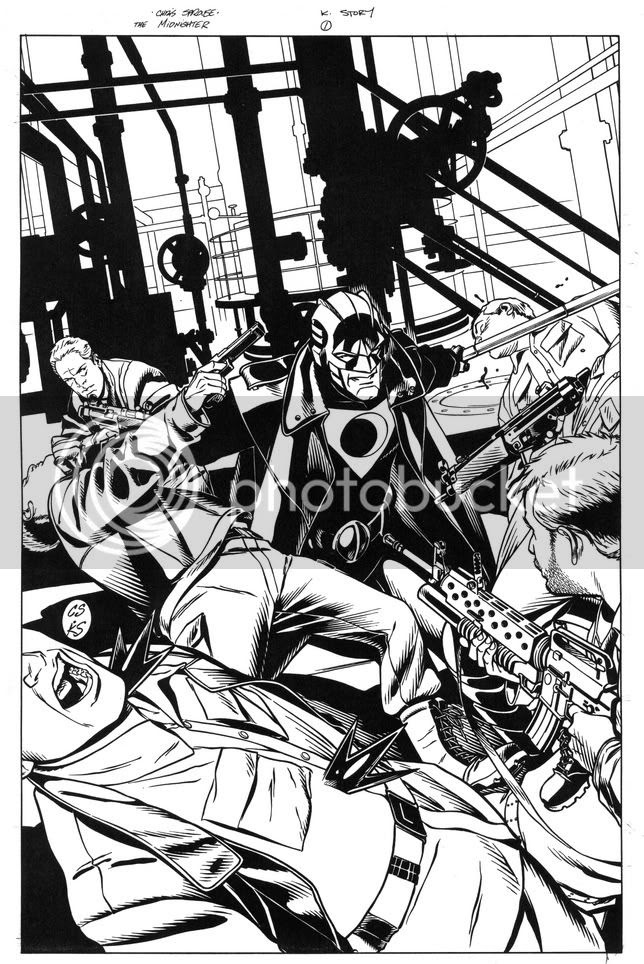 Here's a look at the inked version of the cover for the first issue of The Midnighter. Allow me to explain for those of you who aren't familiar with what actually goes into making a comic book: I draw a page or a cover with pencil on an 11X17 piece of Bristol Board art paper(about as thick as poster board). In most cases, the pencil artwork is sent to an inker who goes over the artwork with black india ink using various brushes and pens, thereby making the artwork suitable for printing. Some inkers have such a unique style of their own that they can change the look of the finished piece dramatically, sometimes making the artwork better, sometimes not. For several years, I've been lucky enough to work with the inker Karl Story, who is one of the guys who makes the art better! You can compare the inked cover to the pencilled cover and see for yourself.
--C 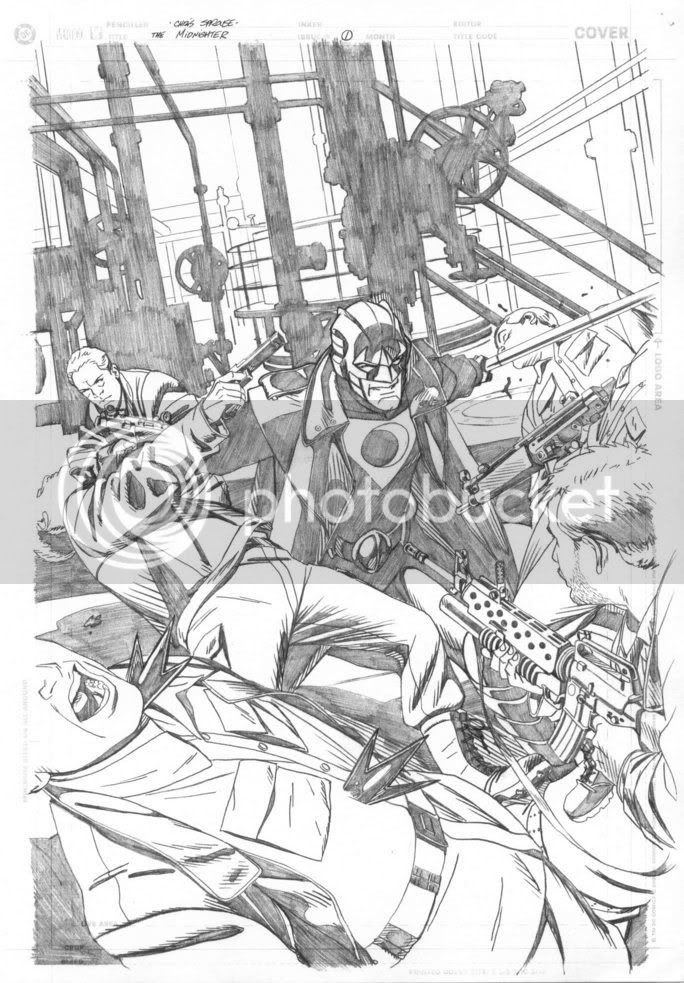 Ah, yes, the Fair. A long standing Central Ohio institution that let's face it, is mainly attended by people looking to eat something that just might kill them.

But Chris and I really dig the Fair. Well, we dig parts of the Fair. We avoid the animals and the midway, as neither one of us is fond of smelly animals facing either a blue ribbon or their doom, nor are we big fans of carnival rides or games. If I really wanted an inflateable Spider-Man, I would just buy one. But the prizes at the Fair are a really good way to get an idea of what the kids were into 2 years ago.

We dig the food, the collectibles pavillion, and the Marketplace. This year I was so hungry when I got there that I filled up immediately on a calzone and was too full to indulge in fried cheese on a stick or mini donuts. I think I am probably better off for skipping those, anyway. Chris had his traditional bratwurst, and grabbed a calzone for the way home. An interesting thing about Chris is that he has experienced very little in the way of fair/carnival/festival food. Until he met me, he had never experienced the glory of a lemon shake up. Our first year together was also shockingly the first time he ate a funnel cake. True, he hasn't much of a sweet tooth, but a funnel cake is a must. He still to this day has never eaten a corn dog.

The collectibles pavillion is a weird and wonderful place. There are 2 outdoor pavillions near the 11th Ave. entrance to the fairgrounds, and each year one is chickens and the other is collectibles. There you can find tin signs, movie posters, sports crap, Star Wars figures, trading card sets, and Pez. There is also a dealer who sells nothing but old metal enameled pins. You can find old concert pins, car logos, or Kermit the Frog.

Then there is the Marketplace. Politics, sunrooms, hot tubs, and every product you have ever seen on TV all under one roof. Where else can you enter to win a free sunroom, read anti-death penalty literature, get your signature analyzed and purchase an Oxy Clean Laundry Ball all in the same building? Nowhere but the Fair! While the Marketplace has some dumb stuff (cheap leather purses and anti-choice rhetoric) it also has fun stuff like the latest in massager technology, and it is where I purchased my first pair of Crocs. It also has one of those bulk candy dealers, where you mix and match crazy candy and pay by the pound. I love them because they have a good selection of non-chocolate candies, and they usually have Pez. The Marketplace is also air conditioned, which I swear, saves lives. The only other air conditioned place at the Fair is the dairy display, and it is usually packed with ice cream buyers and people checking out the butter sculpture. Which come to think of it, we missed this year, dammit!

By the way, we just photographed the BatCopter, we didn't ride in it. No way in hell were we paying $30 a person to ride a helicopter at the Fair. No way in hell. 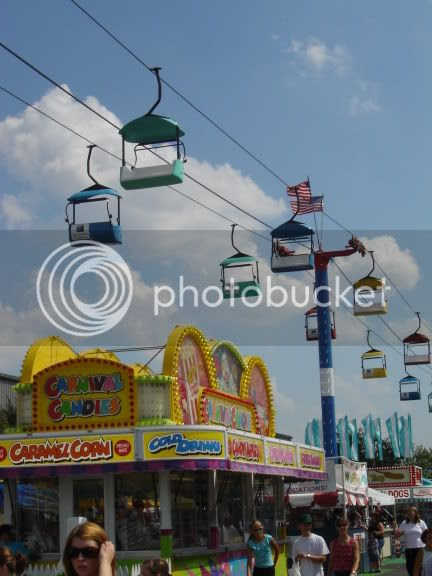 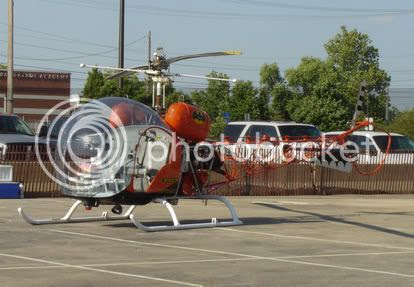 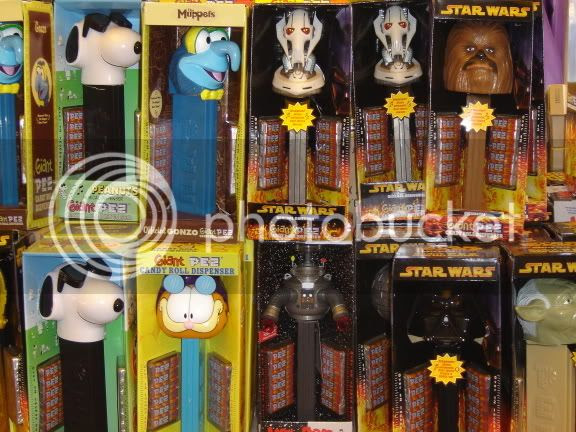 The family visit continued with some fun in
a couple of local parks... 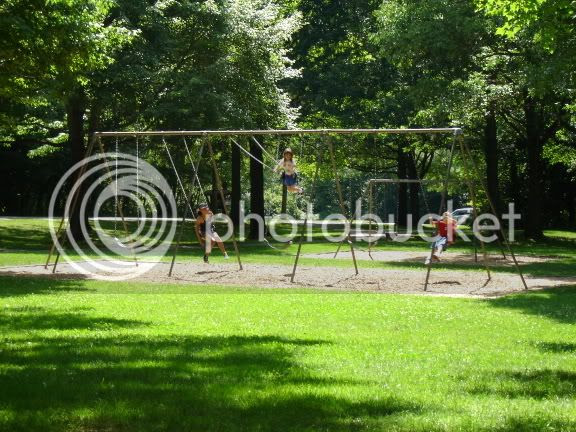 ... followed by a kids' movie festival(lots of
Jim Henson and George Lucas)... 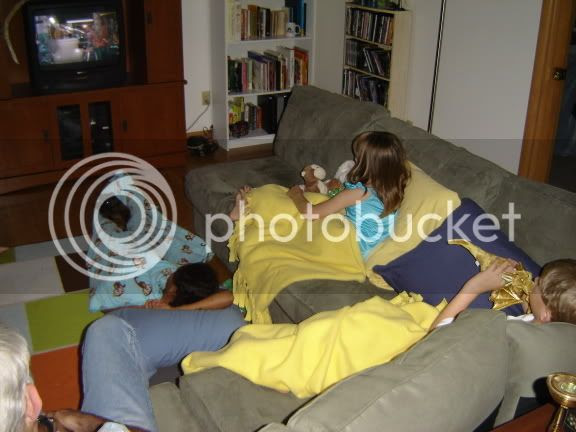 ...then the grand finale--a day at the
Columbus Zoo! 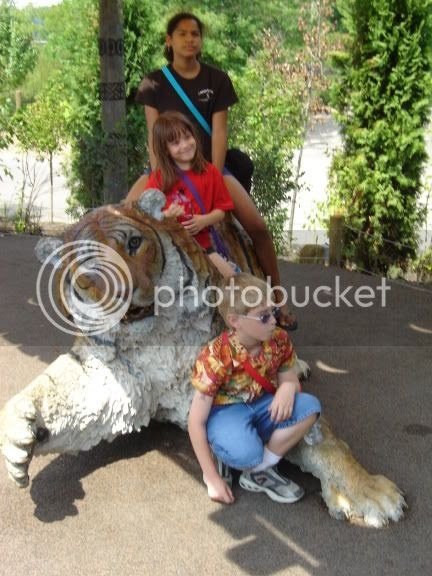 On Sunday, we all went to the Star Wars exhibit at COSI. The Millennium Falcon cockpit mini-planetarium was a hit with the younger set (and Xan), while I enjoyed seeing Luke's landspeeder, the lightsabers and the 6ft. Millennium Falcon filming miniature up close. 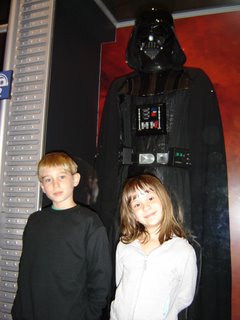 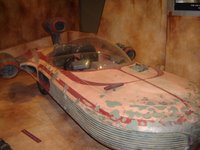 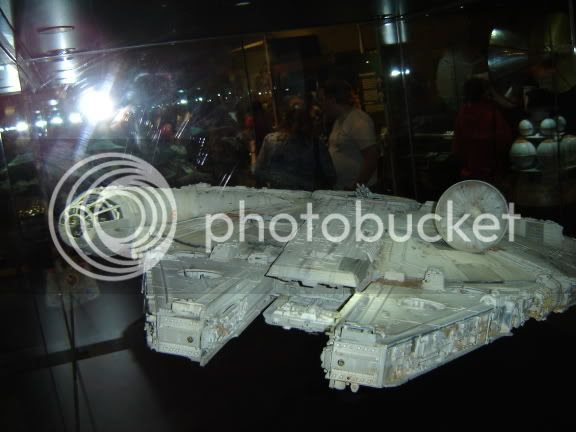 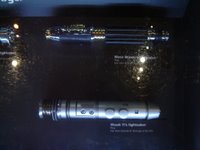 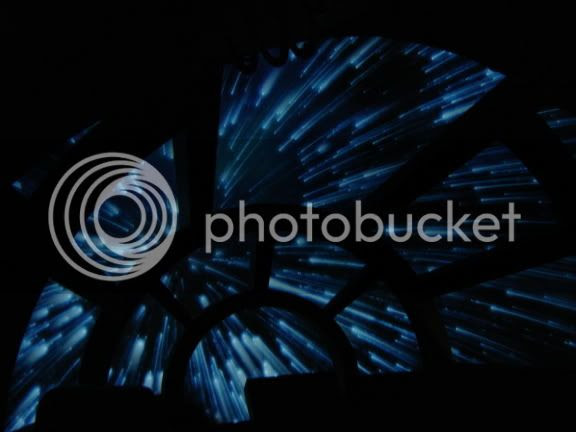 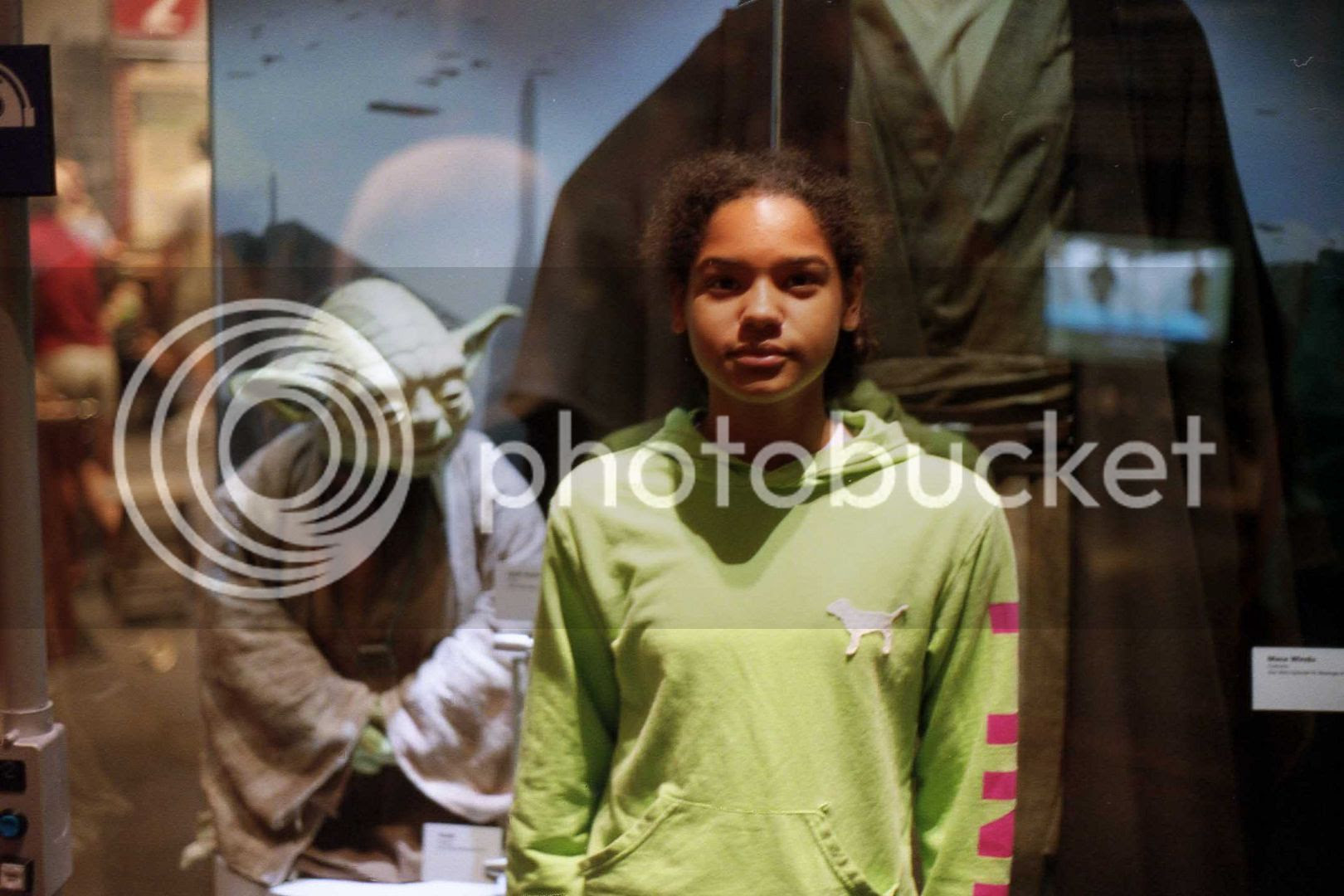 Xan's parents met us later for Italian food, and while we went back home exhausted and full, Xan headed to OSU Hospital to spend the night in the sleep study wing... 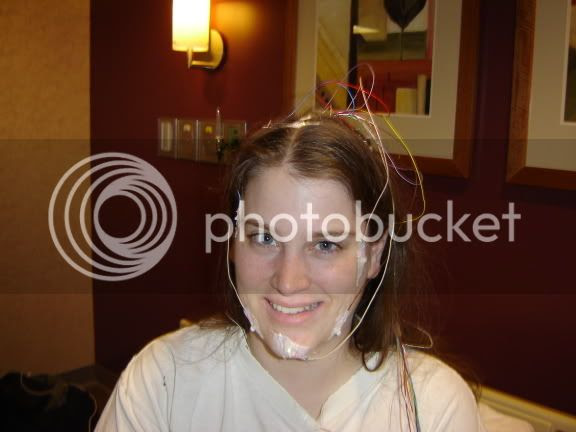 Last week my parents packed the grandkids into a minivan and made the trip up to Columbus. Saturday night we had an India slideshow again for the first time in years(this time on TV via my laptop instead of a rickety old screen). The kids had never seen the pictures before, and seemed to enjoy the horrible late 60's/early 70's clothes and hairstyles the most. The girls loved this photo of their dad reading to Aunt Megan: 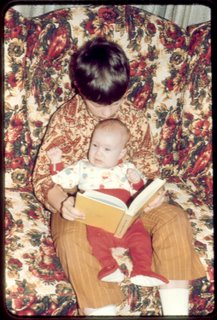 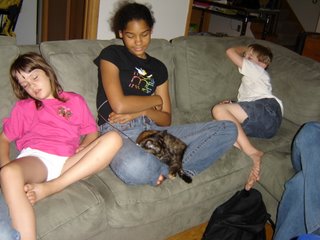 Jess-Belle surprised us that night by not being
terrified by a houseful of strangers. She really
took to Shannon (and vice-versa).
Posted by Chris & Xan at 4:41 PM No comments: