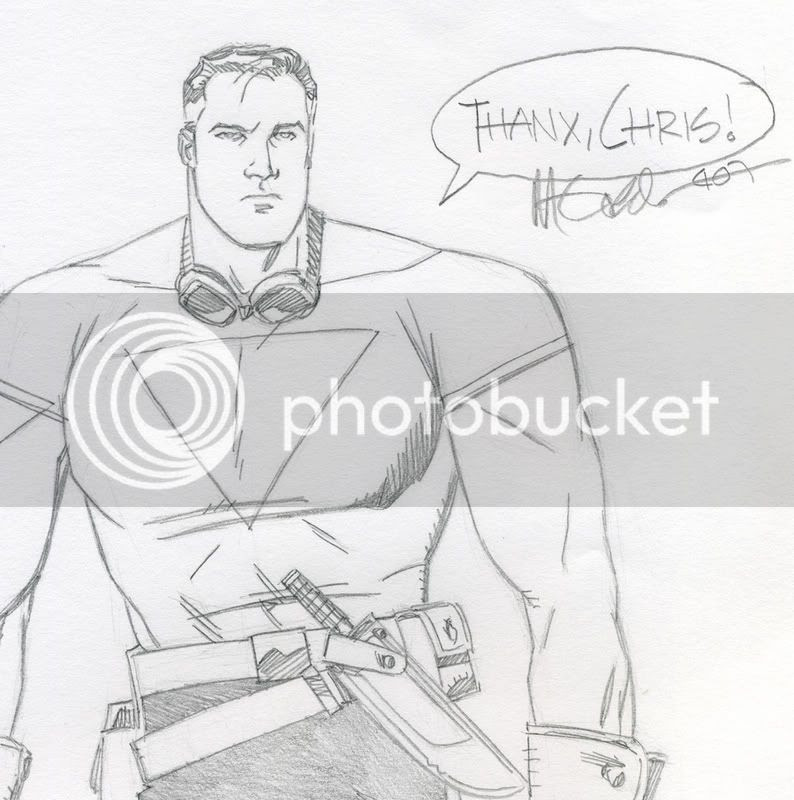 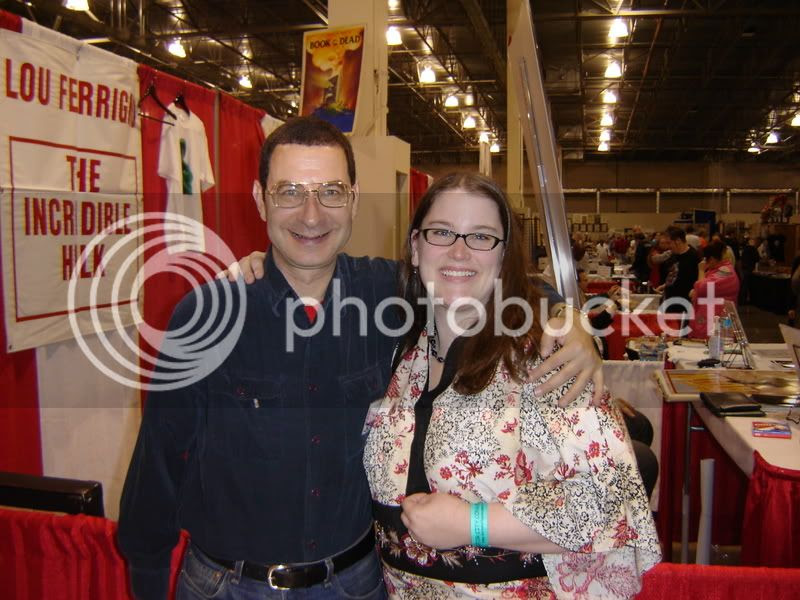 Xan and the man who puts the "Pop" in Snap, Crackle and Pop, Eddie Deezen 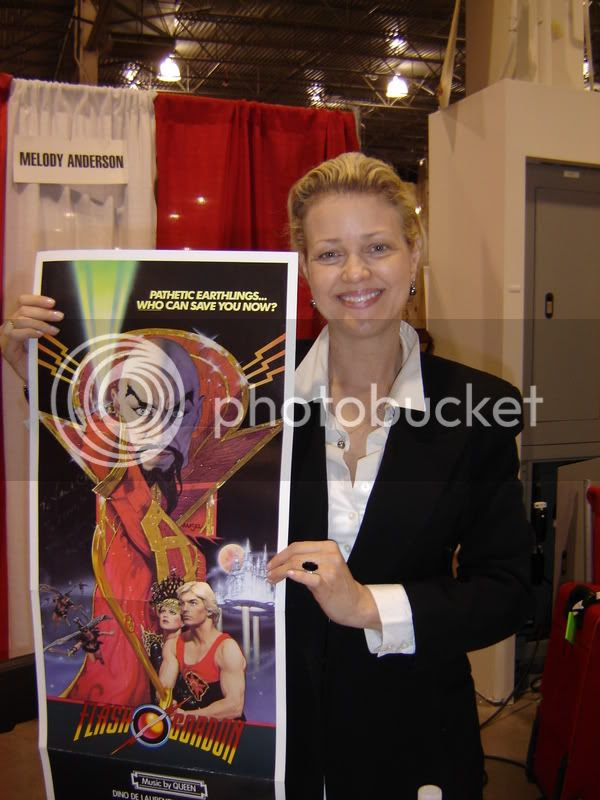 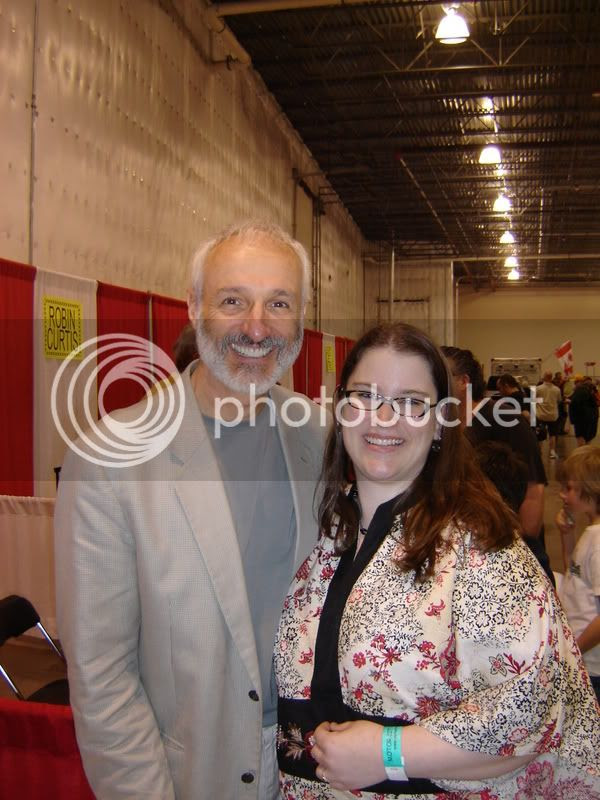 Xan with Michael Gross. I should have asked if he has an UZI4U license plate!


Chris hasn't been a guest at the Motor City Comicon held in Novi, Michigan for a few years now, but we still go up every year as fans. It is a fun convention and always has great guests. This year, I was really excited because Eddie Deezen was there. Why? Because Eddie Deezen rules.

Eddie Deezen of course was in Grease, 1941, was Pop on the Rice Krispies commericals, and starred with the late great Wendy Jo Sperber in I Want To Hold Your Hand. He was also in a movie called Laserblast which was the experiment in what may be my favorite MST3K episodes. Which I asked him about, and he was cool with. I recommend everyone watch Grease tonight so you can all see Deezen hit Sid Caeser in the face with a pie.

We also met Melody Anderson, who played Dale Arden in the 1980s Flash Gordon, which is one of our favorite movies. She was incredibly sweet and talked to us for quite a while and seemed to like that we were total Flash Gordon geeks. She was nice and called us "Real fans" instead of "Freaks". She signed our poster "Go Flash Go!" We are very excited. Hopefully excited enough to finally hang it up on the wall, along with everything else we keep meaning to hang. If anyone has any motivation they can spare, please email us with a pickup time. Or even better for us, a dropoff time.

Also a super nice guy was Michael Gross. I loved Family Ties as a kid, then grew up to adore any and all things Tremors. Did anyone watch Tremors The Series? If so, then you know my feeling of loss and how odd it was that it was cancelled but that show where Shannen Doherty helped people scare their friends stayed on for like 2 more seasons. If not, shame on you! Anyway, he was a pleasure to meet. And I know what you are thinking, and the answer is no, I was a good girl and didn't bring up his appearance in Cool As Ice, the screen debut of one Robert Van Winkle.

Corin Nemec and Jonathan Frakes were there, but we sadly missed them. Perhaps next time. I seem to be at the same convention as Corin Nemec all the time, but I never seem to get the chance to talk to him. Maybe he could tell me why the hell Parker Lewis Can't Lose is not out on DVD yet.

We spent some time talking with Columbus pals Andy Bennet and Dave Aikins, who we oddly never seem to see when we are in Columbus. It is the same deal with Star Wars artist Joe Corroney. He lives like 10 minutes away, and we mainly see him at conventions in other states. We need to call people more often. We also got to hang out with Michael Golden and Renee Witterstaeter, but they live in Connecticut and New York, so conventions are our only real chance to hang with them. Chris was put on the Michael Golden sketch list while at October's Motor City Comicon. The resulting glory of said arrangement is that Tom Strong sketch you see posted here. We were glad to be able to pick it up from him rather than depend on a shipper to deliver it to us. So help me if that had been left on the porch in the rain...

Surprisingly, we didn't purchase much from the dealer tables. I forgot my database to check while flipping through back issues (yes, I have a database) so I didn't want to risk buying something I already have, since I have done that a shameful amount of times. I was also hoping for a Rancor, but no such luck. Oh well, the August show in Toronto is coming up soon (in August, of course!) and then Baltimore is not far behind. More aquisitions and brushes with greatness to follow for sure. After all, Malcolm McDowell is slated to be in Toronto, as well as Sean Astin. I am sure to have more stories of me embarrassingly gushing.
--X
Posted by Chris & Xan at 10:56 PM 3 comments: 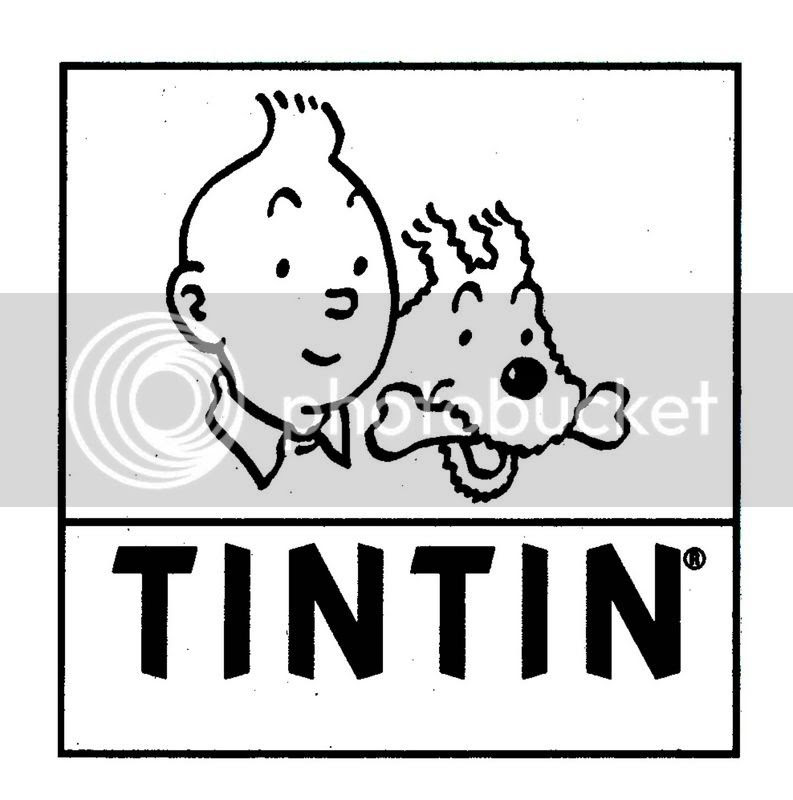 Here's a link to a story over at Newsarama.com about a Tintin movie that's in the works, with Peter Jackson and Steven Spielberg directing and producing. Sounded interesting until I got to the part about the movie being done completely in computer animation. Ugh. I am most definitely not a fan of computer animated cartoon films--every character and object ends up looking like a shiny plastic/vinyl toy--which was entirely appropriate and successful in Toy Story, but just ended up looking weird in other movies. While I've enjoyed other Pixar and Pixar-like movies(I loved The Incredibles), I always felt like they were done as computer animated films just because someone could do them that way, and not that they should have been done that way. The Tintin people claim they want to use 3-D computer animation to retain the feel and look of the comic...Does that sound a little contradictory to anyone but me? It'll work if they use computer animation the way they do in small doses on Futurama, or in the bizarrely repulsive yet fascinating The Drinky Crow Show that just aired last weekend on Adult Swim which is entirely computer-generated. On these two TV series the animation still retains a hand-drawn look. If the Tintin people go for a typical Pixar-ish look for their film, it most definitely won't retain the feel of the series. Frankly, if they're not going to animate it traditionally and retain the look of Herge's drawings, then they may as well just hire actors and film it. After all, Christopher Reeve's Superman looked nothing like a Curt Swan drawing, and the movie Batmen bear no resemblance to their printed counterparts, yet Superman worked fine in film, and some of the Batman movies were okay(I'm not talking about the writing here--just the look of the world and characters when translated to live-action film).