Fall Mix
It's just about October, and it's a crazy week this week, so I thought I'd better post something while I have a moment.

First up, our anniversary is later this week. Hard to believe it's been six years since we said "I do" in the cute little Columbus Wedding Chapel! We had a party/reception with our friends and family a month later, but the ceremony itself was just the two of us together on a beautiful Fall afternoon.

Next up, the Mid-Ohio-Con is this weekend, so I'm scrambling to get ready for that, getting art supplies and organizing my original art pile while trying to do my day job. I'm also trying to not think about the fact that I'm scheduled to draw onstage first thing in the morning on Saturday at the convention...anyone who knows me well knows that "first thing in the morning" and "onstage" are not two of my favorite things...Not that I mind doing anything I can to help out the Con, I just have terrible stage fright and am--er--not at my best early in the day! Oh, well...I'm not certain yet, but I think I'll have a table or booth, so drop by and say "hi" and browse through my art(which will all be for sale), talk comics, and take a look at my upcoming work(you won't see it anywhere else for a while).

If you're one of the people who were on my commission list and you plan to attend Mid-Ohio-Con, I'll be bringing the finished pieces with me to the convention and you can pick them up at my table. I'll mail the remaining commissioned pieces out after the show. Hope everyone likes the final results.

See some of you this weekend!
--C

Update:
I do in fact have a table assigned to me for Mid-Ohio-Con: I'll be at booth #734 near the back wall of the room.
PlanktonPod Playlist Update
Just added some mostly mellow stuff this week including some Fall-themed songs from Polaris and Robyn Hitchcock, some covers from The Posies' Jon Auer and The Divine Comedy, and finally a cover of the song Xan and I danced to at our wedding party...Awwww....
Posted by Chris & Xan at 1:49 PM 4 comments:

Better Things
The song I added to the PlanktonPod today was played for the first time publicly on the Sept. 21, 2001 episode of Late Night With Conan O'Brien(Conan's first show back, I believe). It was the first tiny peep of optimism I had heard in a while and it moved me. Things got better for me personally after a while--Xan and I got married, my career hit some pretty high points...but it seems like the country is in worse shape than ever now. I'm still hopeful, so I thought I'd share "Better Things" today.
--C
Posted by Chris & Xan at 12:28 AM No comments:

Mid-Ohio Con
Lots of people have been asking me about Mid-Ohio Con and it looks like I can finally confirm that I will definitely be there! For those who don't know, Mid-Ohio Con is a comic convention held in Columbus Ohio, usually on Thanksgiving weekend, but it's on October 4th and 5th this year. I've been a guest at the show for at least fifteen years running(with only one missed year when i was actually moving to Columbus the weekend of the con), and it's always proven to be a good time. Click HERE to go to the Mid-Ohio Con website to see who else will be there, get driving directions, buy tickets, etc., and click HERE to go to Mid-Ohio Con's own blog.
--C 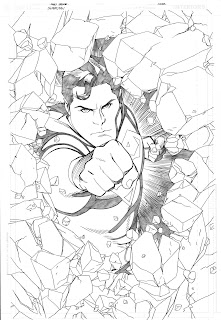 Haven't posted in a little while, so here's an update on what's going on with us:

I can finally announce a couple of the things I've been working on since Number Of The Beast. My first post-NOTB work was a two-part story featuring the character Deathblow, basically showing a little of the events leading up to and just after the NOTB storyline. The story will be published as back-up stories in two upcoming Wildstorm books--I'll post the exact titles and issues as soon as I know what they are. The next project I was scheduled to do I can reveal now because it fell through! I was supposed to do some work on Superman with new Superman writer James Robinson, but the storyline I was supposed to draw was shelved by the powers-that-be. I did do one cover which may or may not see print--it's the image at the top of this post, and it is currently my best rendition of the Man of Steel ever, in my own opinion(I can't stand the way I've drawn him almost every other time I've had to--he just never looked like the "real" Superman to me until this drawing). Supposedly I'll be doing some more covers for the Superman books soon. The third project in the works will have to wait until I get the go-ahead to talk about it, but trust me--it'll make a lot of people very happy, but no one will be more pleased than I am to be drawing it! Stay tuned!

I've also been hard at work on the commissions solicited in the last post on this blog. They'll be finished soon and I'll let everyone who is owed a drawing know when they're ready to be mailed out so we can arrange everything. If I choose to do another round(which I probably will--these are going pretty well), I'll announce it here first! Thanks to everyone who wrote in expressing interest.

Not that I have any spare time, but whenever I can I've been working with Perhapanauts and Tellos writer Todd Dezago on my Modern Masters book. It's been weird but kind of fun to relive some of this stuff in the re-telling, and even more amusing seeing all of my old pre-professional stuff that I just dug out of boxes in the basement. A lot of this work will probably make it in the book, so look out!

On the personal front, now that the nearly year-long marathon that was Number Of The Beast is over(it was a blast to do and I was happy with the results, but it was really hard work!), Xan and I have been enjoying lots of time together again. There was the Wisconsin trip I've already written about, and we just bought a new car, a little Honda Fit--a great little car, our first new one together. We can't get enough of it, so we've been making up reasons to go on road trips, just cruising around listening to music like we were teenagers! We have a few concert-related road trips scheduled for the next couple of months--Nick Lowe, Billy Bragg, and we'll be seeing Joe Jackson again when he comes to Columbus. Xan bought me a brand new digital camera for my birthday, so our photos from these shows will be quite a bit better than the last concert pics I posted.

Xan's had some solo fun lately, too. She and my sister Megan, metal-heads that they are, hit a Motley Crue show a couple of weeks ago. Xan also saw Alice Cooper here in Columbus last week. As for work, she's been heading into the office a few times each week to train and generally be on-hand to advise new-hires, then returning home to find me and the little girl feeling clingy. 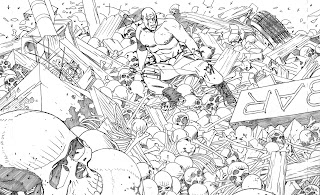 My favorite panel from the Deathblow story I just finished

PlanktonPod Playlist Update
Just a mini-playlist this time. I tried to come up with tons of songs that had something to do with the subjects I just covered above, but it's late and I'm beat...First is a song dedicated to Xan, "Metal Baby" by Teenage Fanclub, then we have a cover of the Flaming Lips "Waitin' For A Superman" by Iron and Wine(because I sure was waitin' for a Superman script for the last few weeks), and finally a cover of one of my favorite songs of all time, David Bowie's "Heroes," by Joe Jackson...I'm hoping he pulls out a cover even half this cool when we see him next month(this one's for you, Dave Aikins!).