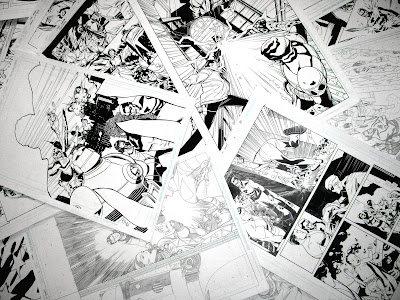 I just created a second blog site where I'll be selling original comic book art from throughout my career. Check it out HERE or through the top link on the right side of this page. You'll find everything from Tom Strong pages to Number of the Beast layouts for sale, including lots of unpublished finished and unfinished pencil art(jpegs provided) as well as a few surprises. If you see anything you want to buy, there are instructions in the first post at the bottom of the page. Thanks!
--C

PlanktonPod Playlist Update
I was hanging around with con and concert-going pal Dave Aikins recently, and I mentioned we'd be going to see Dean & Britta at the Wexner Center here in Columbus next month. Dave claimed to have never heard of Dean & Britta or their previous band Luna, not to mention Dean Wareham's first band, Galaxie 500. Voila! Instant idea for a new playlist: an introduction to Luna and Dean & Britta. This one's for you (again), Dave! 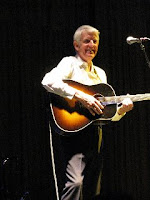 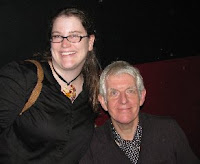 Nick Lowe at the Beachland Ballroom in Cleveland, OH 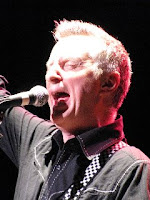 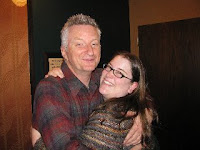 Billy Bragg at the State Theatre in State College, PA

The poster for Lat Den Ratte Komma In, a highlight of the 2008 Horror Movie Marathon
Posted by Chris & Xan at 9:22 PM 3 comments:

Mid-Ohio-Con 2008
Whew! The con was exhausting this year! Under new management and in a new venue, Mid-Ohio-Con was possibly even busier and more crowded(on Saturday at least) than in years past. Or maybe it just seemed that way because I started to get a wicked headache that wouldn't let up about half way through the day. Anyway, I started the show drawing onstage for about an hour for a charity auction(don't know how the piece did in the auction). Then it was off to the booth to sign and sketch. Fans got a sneak preview of my newest project, and the reactions were uniformly positive(more details soon)! My sister Megan and her son Aaron and his friend EJ showed up around noon and seemed to have a blast at their first comic convention. My headache was ramping up to full bore by this time, so I apologize if I was surly or brusque with anyone who met me. I did sketches for everyone I could fit in and talked with lots of really nice people. That's one thing I like about Mid-Ohio-Con in particular: the people attending seem to all be friendly and very easy to talk to. Xan arrived after she got off work and she was off filling in huge chunks of her Gold Key Twilight Zone collection in no time. No big dinners or get-togethers for us that night since I felt so bad--we just went home and crashed.

Sunday was quieter and lots more fun for me--I was well-rested for a change and had no sign of a headache! I had several long conversations with fans and did much better sketches than on Saturday. Xan found a Star Wars rancor figure she'd been searching for high and low for years, and I even got in some shopping and lunch--two things I almost never get at cons! Highlights of the con for me: talking with fans and the copies of the really neat Mice Templar comic given to me by my booth neighbor, writer Bryan J. L. Glass.

Thanks to everybody who came out and said "hi!" and thanks to Megan for the first two photos below! 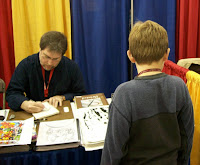 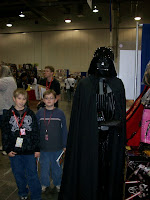 Aaron and EJ look like they could take this Vader... 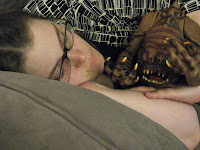