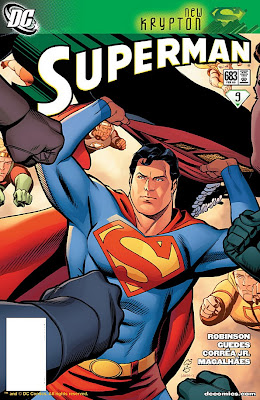 The next of my Superman covers (Superman #683) hits comic shops this week--Friday, I think...Above is the final piece with colors once again by Laura Martin. Below you'll find a jpeg of the pencil art. What you'll also find below is a photo from exactly three years ago--New Year's Eve 2005, about this very time of night. Xan snapped it a few minutes after I finished what I thought would be my very last Tom Strong drawing ever, the final page of Tom Strong #36--a full-page shot of the Strong family waving to their fans and supporters. A weird night--the rest of the country was gearing up for celebration, but I was feeling a strange mix of the relief I always feel when finishing a job and utter sadness over the end of Tom Strong and my cat Max's failing health. Like I said, weird night. Now on the last night of 2008, things are looking a little more upbeat...as I type these words, I have a cute little tortoise-shell two-year old cat on my lap and hope to soon have some Tom Strong news to report. Stay tuned! Hope everyone's new year gets off to a good start! 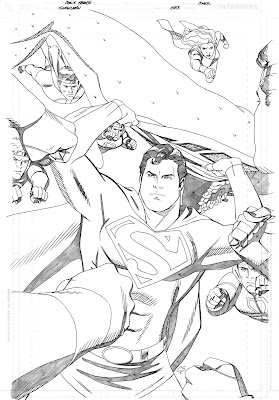 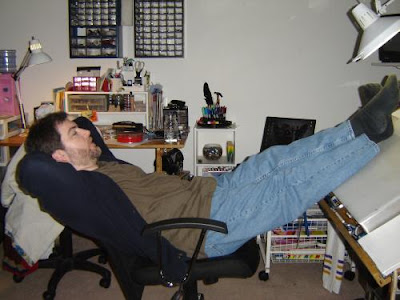 PlanktonPod Playlist Update
I took down the Xmas songs and added a bunch of new stuff. The new playlist is made up of two of my favorite musical discoveries of 2008. First up is the work of Dave Derby. Derby was the leader of a 90's band called The Dambuilders before he went solo, and now he's the singer/songwriter behind a group called Gramercy Arms, sort of an indie-supergroup which also has ex-Luna member Sean Eden on guitar. Gotta love the homage to "Beth" by Kiss in "Even Further Behind!" Then I added music by a group that started off as The Greenberry Woods, a Maryland band who recently evolved into Splitsville. I cannot get the Splitsville songs I've selected out of my head this week--but that's a good thing in this case, not like when some TV ad jingle gets stuck in your brain--and I just adore "Super-Geek!" 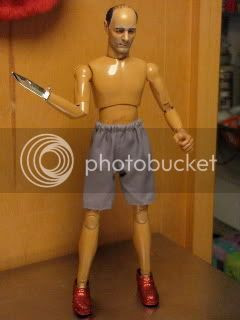 Hey everybody, Xan here, and I wanted to share the super cool stocking stuffer Chris made this year.  The above image is the Happy Time Harry doll he made for me, complete with scar from when he had half of his liver removed.
Okay, you might be saying, "What the hell are you talking about?" Well, one of my favorite television shows is Aqua Teen Hunger Force, which is part of Cartoon Network's Adult Swim lineup.  It's a 15 minute show about a milkshake, box of fries, and a meatwad (named Meatwad) who live together on the South Jersey Shore in a town called Hamburger.  Anyway, there was an episode called "Dumber Dolls" which I dearly loved, in which Meatwad wants a very expensive doll called "Jiggle Billy", but Frylock instead buys him the very affordable at $2.99 "Happy Time Harry" doll, complete with a knife hand, red dancin' glitter shoes, and Action Bills.  Happy Time Harry is voiced by David Cross, and has lived a very hard life and just being around him makes everyone depressed.  The episode is hilarious.
Anyway, Chris has been freaking me out lately by Frankensteining G.I. Joe figures.  A head here, a limb there, and boom, you've got a full figure, but the heads lying around is just a bit too Apocalypse Now for me.  Anyway, one day when he was trying to replace some Kung Fu Grip hands, I walked in the studio to find a handless G.I. Joe and rather than be completely freaked out, I had an idea.  I said "Hey, are there G.I. Joe hunting or Bowie knives?  If we could attach them to the arm instead of hands, we could make a Happy Time Harry!"  Evidently, this started Chris scheming.
Christmas Eve is when Chris and I usually open the presents we got each other, since my parents and Juice come over Christmas morning for gifts and copious amounts of food and usually, James Bond.  So Christmas Eve he says to me "You have some stocking stuffers!" and I looked at my stocking and the torso of an action figure was hanging out of it.  At first, I thought that he was messing with me and just trying to gross me out with some more body parts, but when I looked more closely, I noticed this figure had a knife for a hand!  I yelped and said "Did you make me a Happy Time Harry?!"  He confirmed this, and I ran over to grab him out of my stocking and was so excited to see that he had red glitter shoes too!  I was so excited, and just had to take photos.
I love this present.  The stocking also contained some iTunes and Starbucks gift cards (yeah, I know, but I'm a sucker for the eggnog latte, and they have a drive through a block away from our house), and he also got me 2 seasons of Psych, a green iPod shuffle, an extremely detailed book on The Twilight Zone (which I will be pouring through during the New Years Marathon), and the 6th volume of Aqua Teen Hunger Force on DVD.  I love all the gifts, but Happy Time Harry just reminds me that Chris is so creative, and I love his attention to detail.  He's also so sweet to make me something this cool.  Perhaps it is odd to feel all mushy because of a drunken doll who likes to cut himself with his knife hand, but I do.  I've got the best husband in all of explored space.
Posted by Chris & Xan at 11:20 AM 3 comments: 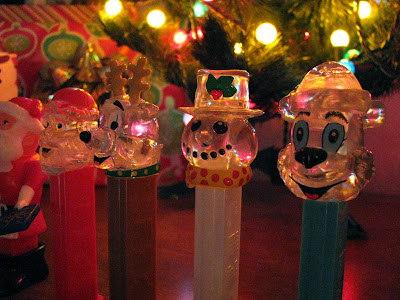 I know it's not very original, but I finally updated the PlanktonPod with a new playlist featuring a dozen of my favorite alternative and rock holiday-themed songs. As I've mentioned previously, I collect alternative cover songs. Well, I also collect alternative Christmas/holiday music, and I picked my favorite dozen songs for the Pod tonight. Hopefully, these songs won't be as annoying as what you might hear over store PA systems this season, and everyone should be thankful I wasn't feeling so mischievous that I made a prog-rock Christmas playlist (because I could have--somehow I've also amassed a frightening amount of horribly pretentious prog holiday music, including tracks by Jon Anderson of Yes, Jethro Tull, the Moody Blues and others...maybe next year).

Enjoy, and have a good holiday season!

Supergirl #36
Here's the completed cover for Supergirl #36, in comic shops today! Beautiful colors by Laura Martin saved this piece, in my opinion--I didn't like it very much when I drew it. 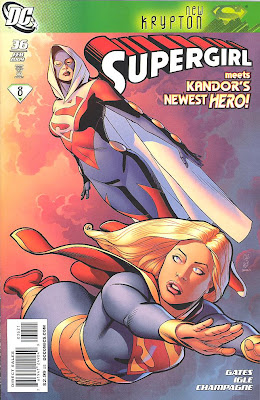 Non-Work Update
I've been posting pretty much nothing but work-related stuff lately, so here's a little photo guide to what Xan and I have been up to in our off time. Comic fans need not worry--my next Superman-related cover comes out this week, so I'll probably post some more art on Wednesday. 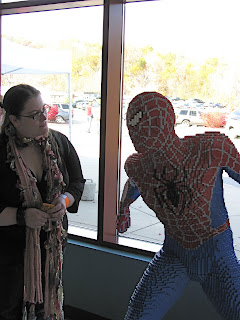 Xan and I hit a Pittsburgh toy show in October. We had a nice long talk with guest actor Ray Park(Darth Maul) and delivered a sketch promised to him when we saw him at Dragon Con in Atlanta a few years ago. On the way out, Xan posed with the life-size Lego Spider-Man(above). 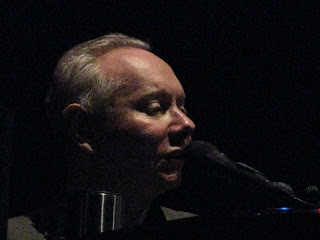 We also made it to a few more concerts. First up was Joe Jackson at the Southern Theatre in downtown Columbus... 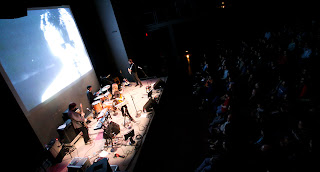 ...then we saw Dean & Britta (formerly of the band Luna) performing "13 Most Beautiful" at the Wexner Center as part of a big Andy Warhol multimedia exhibit. The band accompanied thirteen Warhol "screen tests" with live music, including a couple of Luna rarities, a Velvet Underground cover and several new compositions. If you look really closely, you can see Xan and myself in the front row, down at the bottom edge of the photo above. The photo was taken by Kim Rottmayer, and you can see more of Kim's photos from that night at Picture The Sound.com. 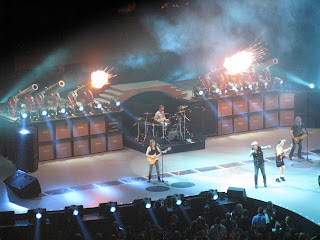 The very next night, Xan and my sister Megan enjoyed themselves thoroughly at the AC/DC concert at the Schottenstein. Xan reports that it "rocked (her) face!!!" 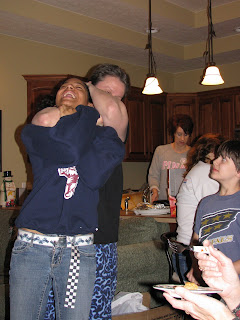 My family, including my brother Mike and his wife and kids, spent Thanksgiving weekend in Ohio. We showed Mike around Columbus a little, but mostly everyone gathered at Megan's house where we looked at old photos and talked into the night. Above, Mike horses around with his daughters Shannon and Brittany. 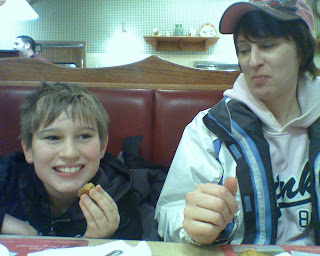 A week later, the Sprouse family gathered again, this time to help my parents move. It was bitterly cold and thoroughly exhausting, but I have to admit, it was good getting to see everyone so much this year. The photo shows Megan and her son Aaron, slap-happy and punch-drunk during a dinner stop on the way back to Ohio. 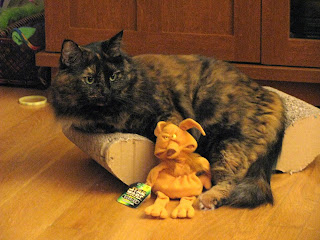 The little Belly-Girl's been busy, too. Here she works on her Jabba the Hut impression with her own little Salacious Crumb toy... 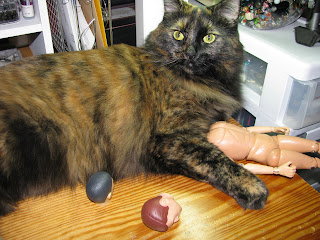 ...and here she is assisting me as I try to repair some action figures. Kung-fu Grip is no match for Jess-Belle's mighty paws! 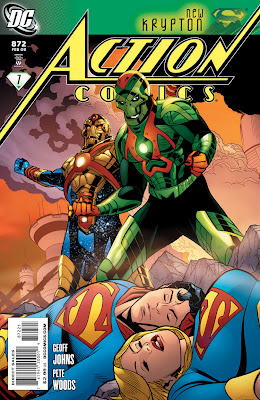 Whoah! I was so busy helping my parents move this past week that I didn't realize that the first of my four Superman covers hit the stands yesterday! So, for all the SprouseNet readers asking for more artwork, here's a look at each step of the creation of the cover of Action Comics #872--layouts & pencils by me, followed by Karl Story's inks. The finished cover with colors by Guy Major is shown above...