London, Part 1
These photos were taken on Monday, 25 September, basically our first day in London. We arrived the previous day, but after flying out of Columbus around 3 on Saturday and finally arriving at the hotel at 10:30 Sunday, that first day was pretty much a wash. We dropped off the luggage (check-in was not until 2!) then went walking around Notting Hill and bought some records. When we finally got to our room, we both were just filthy and wanted a shower, and then we just crashed.

Monday we did some shopping. Chris found a lot of stuff (an English version of a book he only has in Spanish in addition to the Tintin, Milou and Capt. Haddock figurines in the photo) at the Tintin shop, and we both spent a lot of time in Forbidden Planet, a geek paradise. I felt totally at home there-looking around at sci-fi books and the music playing was the soundtrack from Twilight Zone-The Movie.

We ate dinner at a pub called the Bayswater Arms and ate fish and chips-excellent. Something was up with the ketchup. It is bottled here in England, and it tasted a little different. It was thicker and not as sweet-it was much better than the American ketchup, and we are not sure why. We did notice after we ate it that the expiration date had passed, so maybe it was just fermentation. And if that is the case, I'm going to leave my ketchup out in the sun for a month when we get home.

We also had our first ride on the London Underground. Chris was a lot better at finding his way than I was-I was really glad he was with me. Having lived my whole life in a city with really crappy public transportation (you know I love you, COTA, but you just aren't enough!) I have never been good at figuring out what train to take and when. Chris spent a lot of time on the DC Metro, so he was ready for the tube. We never got lost, but I'm sure I would have had I been alone. But, after a few transfers I finally got the hang of it. I really wish we had something similar in Ohio-it is so fast and really helps with congestion. If everyone on the tube had driven into the city it would have been jammed. They even have an 8 pound congestion fee.

Our hotel is very nice. It is small, but has a sofa in addition to the bed, a kitchen area with sink, microwave, fridge, and 2 burner range, and a dvd player. We've been stocking the fridge with snacks and drinks from the Tesco down the street. Some of my new favorite things are cheese and onion crisps, and the Magnum strawberry secret. We will say that Irn-Bru is not our new favorite thing. 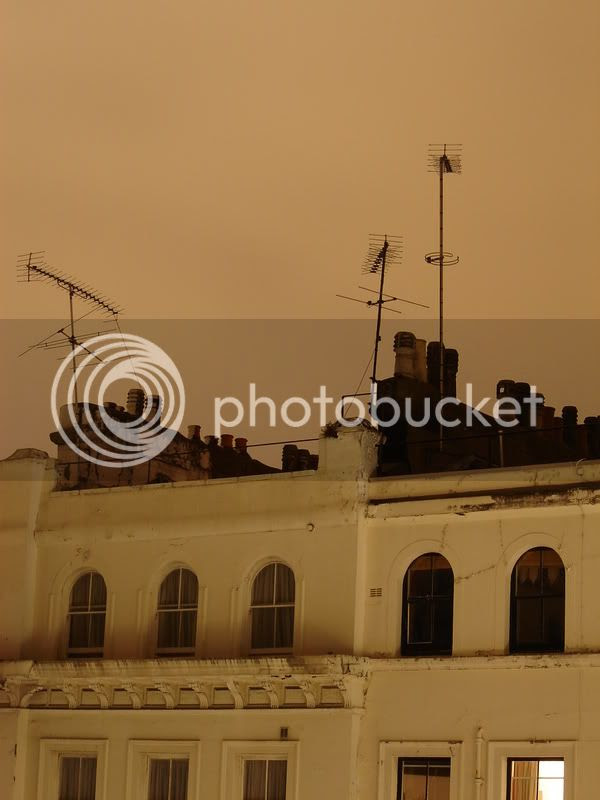 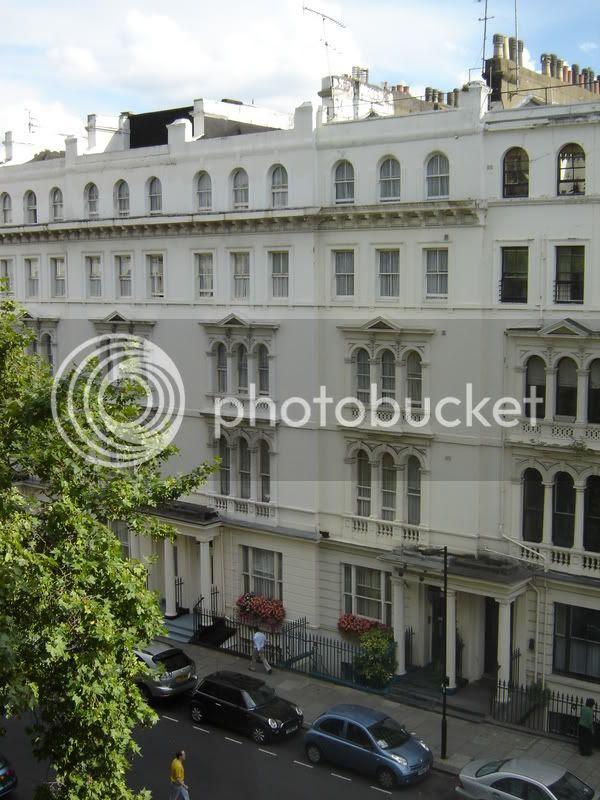 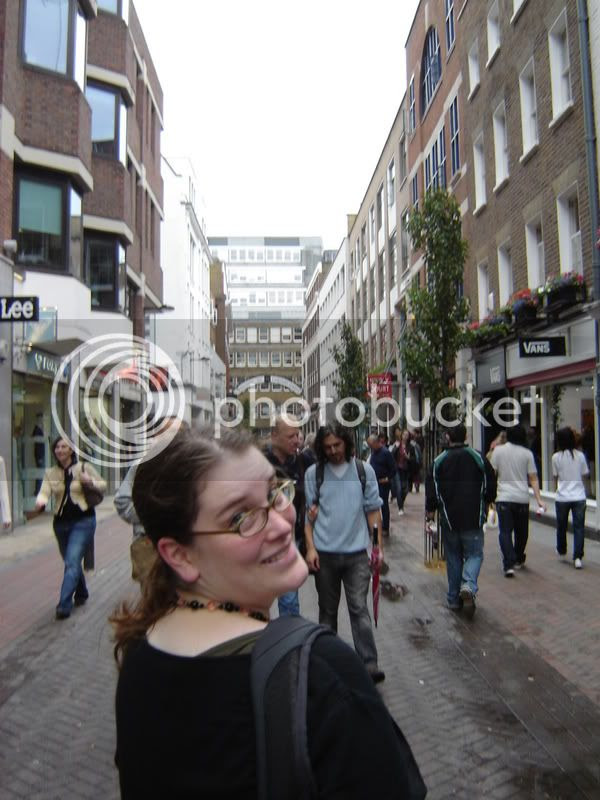 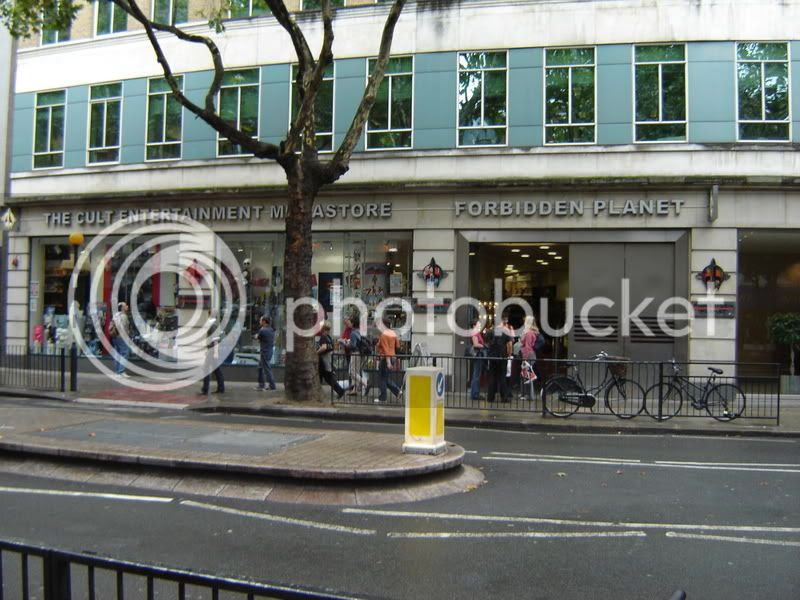 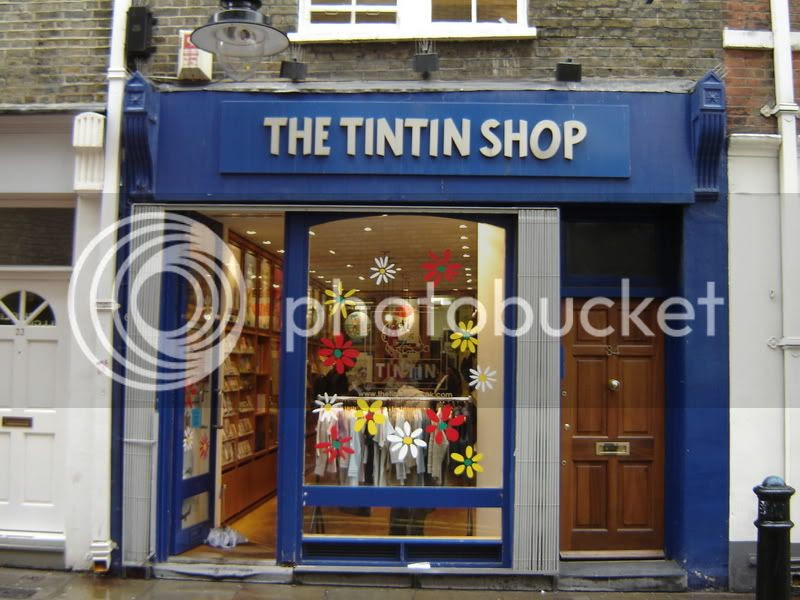 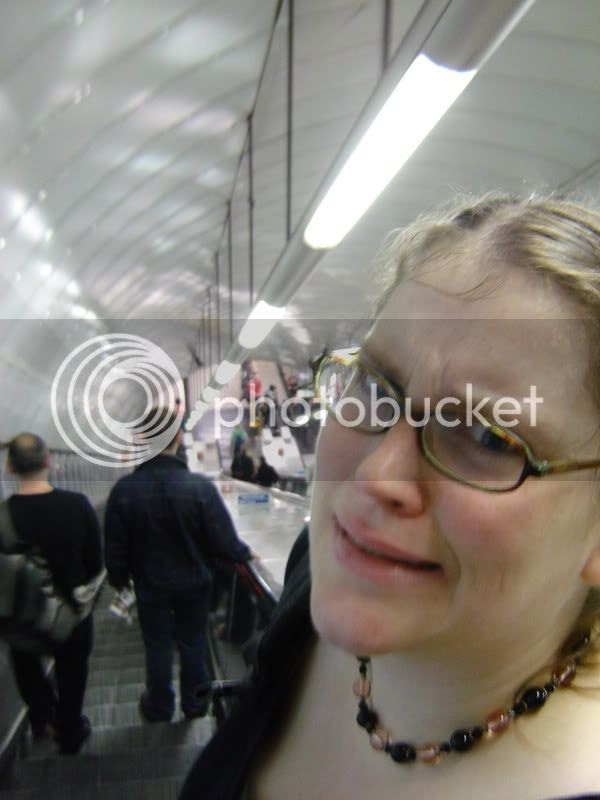 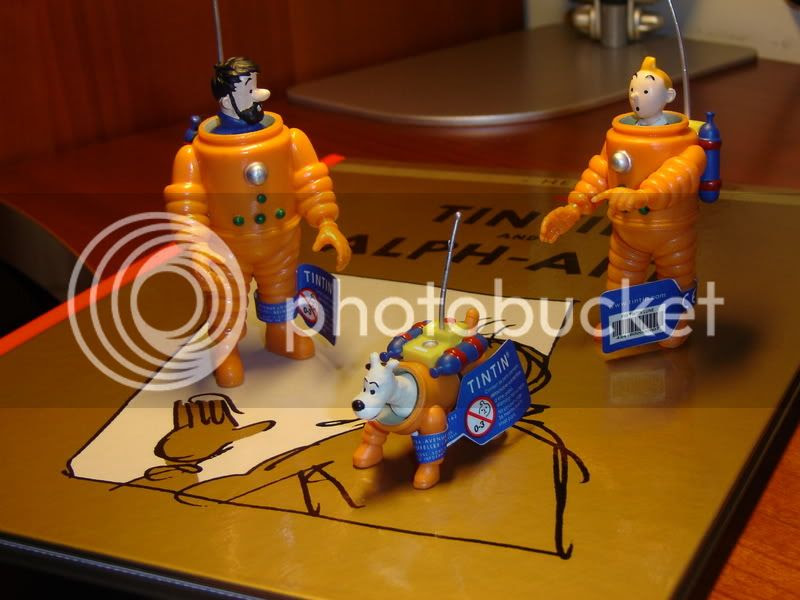 From Top:
1) Chim-Chimney, Chim-Chim, Cheroo--the view from our hotel at night
2) The view on our first day in London, uncharacteristically hot and sunny
3) Ah! This is more like it! Xan on her way down a rainy Carnaby Street to browse the selection of Dr. Marten's Boots
4) Forbidden Planet
5) The Tintin Shop UK
6) "I can assure you this is not the least bit amusing" says Xan as she rides the escalator in the Tottenham Court Tube Station, site of much Lycanthropic scariness in An American Werewolf In London
7) Examining the day's spoils back in the hotel room 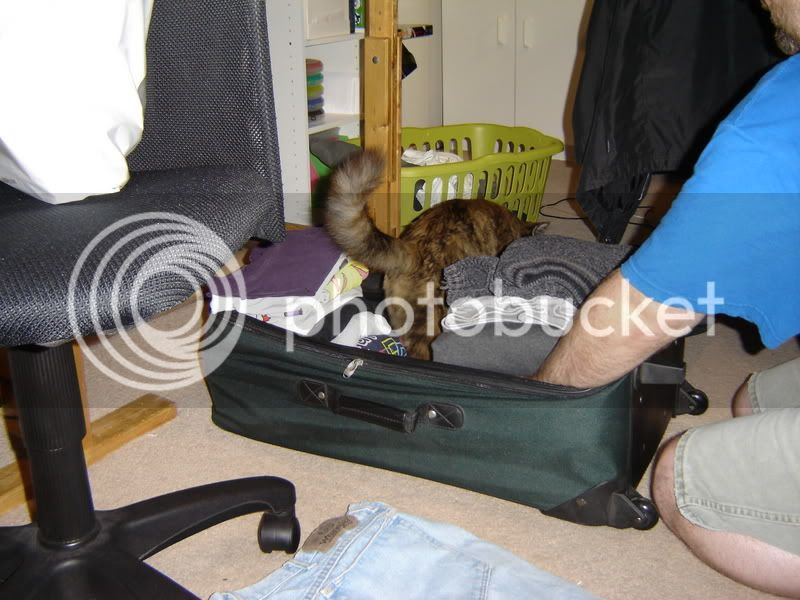 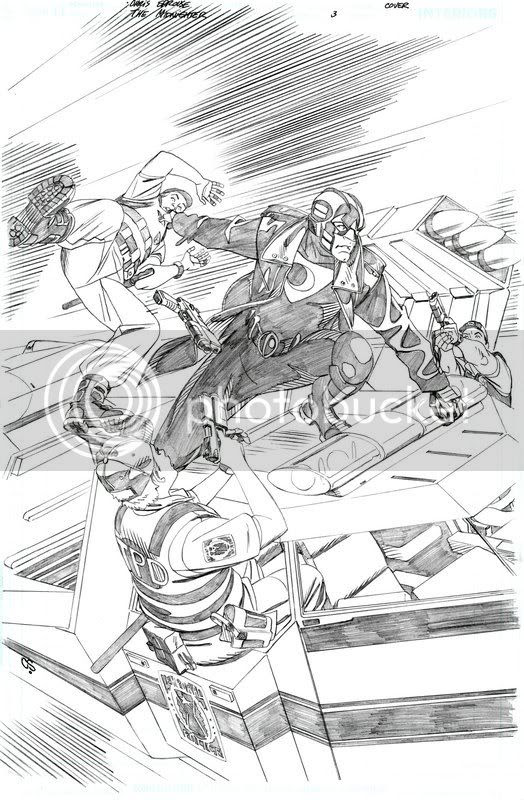 Here's the pencil art for the cover of The Midnighter #3...


...and you can click HERE to see a 3-page preview of The Midnighter #1 over at the comics news website Newsarama.com. They've posted the pages out of order, but you can get a sense of what the color work on the book will look like. You can also download a PDF version of the preview, complete with the cover(which they appear to have switched back to the original one I drew) by clicking HERE.

If you care, and frequent comic book shops, here's a tentative release schedule for upcoming projects of mine:

-Justice League Of America #3 - Nov. 1 (did a Superman cover for this) 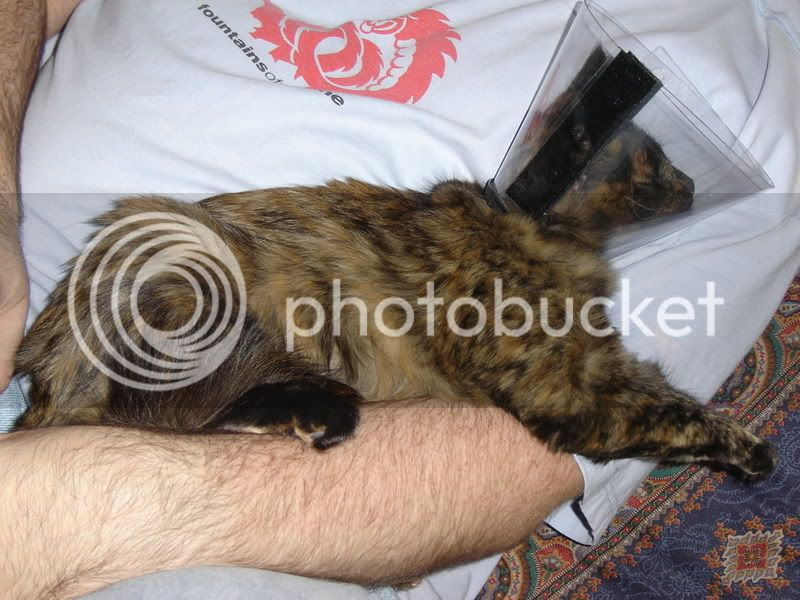 Hey, the lamp's running away!

Well I suppose Jess-Belle in her little space helmet needs some 'splainin'. The story beings with her getting spayed, nothing out of the ordinary. Spay and neuter procedures are some of the most common animal surgeries. She was spayed on a Tuesday, and all was well until Saturday night.

She had been doing just fine. Her first day she was weary, which was to be expected, but after that she was pretty much back to normal, which was good and bad. She was feeling better so she was back to normal activity, but she needed to be taking it easy-not playing so rough, not jumping as much or as high, that sort of thing. We tried to keep her activity down, but she is a kitten still and quite the pistol so it was difficult.

So Saturday evening comes along, and around bedtime (after midnight is all I remember) Chris noticed an egg-sized bulge under her incision. It was hard to the touch, but it didn't seem to be hurting her all that much. Yet we felt it would be best to take her to the emergency room just to be sure.

Taking her in was probably the smartest thing we have ever done, because a few hours and some x-rays later the er doctor told us that the bulge was in fact her intestines pushing through the internal sutures which somehow Jess-Belle had managed to break. There is no way to be sure how this happened-maybe her jumping, maybe loose sutures, who knows? Her external sutures were still intact so this wasn't some Evil Dead moment or anything, but it was dangerous. When this happens to cats they run the risk of the intestines pushing through the sutures which stresses the tissue, requiring removal of such tissue. It is the same concept as wrapping a string around the tip of your finger until it turns purple and leaving it that way for a few days. Ouch.

We decided that emergency surgery was the best idea, since there was no way to know if and when the intestines would push through further. By this time it was 5am Saturday night/Sunday morning, so the surgery team had to be called in for this. So, a few more hours and a few hundred dollars later, Jess-Belle was healing from being re-opened, tucked back in, and re-sutured, this time with a much longer incision and staples instead of stiches. Again I say ouch.

So now, to make sure this does not happen again, she is on cat bed rest. She is confined to our bedroom which we have basically stripped down to a bed on the floor as she is not supposed to be jumping or climbing stairs for the next 10 days after surgery. She has to wear that lampshade until the staples come out so she does not pick at them. The vet suggested a cage until they noticed she was trying to climb the cage in the hospital, so we decided an empty bedroom was the best way to go. She takes pain pills 3-4 times a day, and is basically pitiful.

We can remove the lampshade for her to eat, but it has to go right back on because those staples are the first thing she goes for when it comes off. And she hates it so much that she attacks it while it is off and on the bed. It cannot come off soon enough for her and us. We have been spending as much time with her as we can. Today has been better than other days, since the original theatrical versions of Star Wars came out on DVD and there was an ipod/itunes update that allows for Tetris to be installed on the ipod, both of which ensure we have plenty to keep us occupied while she is sleeping.

The vet says this is not a rare thing, but also not common, yet also completely fixable. If she stays rested, she can have her staples out next week and be back to a normal crazy kitten. We are all anxious for her to heal. Especially since she keeps hitting the wall and losing her balance with that lampshade, resulting in moments where you don't know wether to laugh or cry.

No matter how difficult this ordeal has been for all of us, this is no reason for anyone not to heed the words of Bob Barker-always have your pets spayed or neutered.
Posted by Chris & Xan at 5:39 PM No comments:

My Very Elegant Mother Just Served Us Nachos-get used to it!

Chris came up with this as a replacemet to My Very Elegant Mother Just Served Us Nine Pickles. I suppose it could be what the next generation of budding astronomers will learn in their 1st grade science unit about the solar system. My Very Elegant Mother Just Served Us Nine Pickles was of course, until recently, the mnemonic device to help remember the planets. Each letter at the beginning of each word is also the first letter of each planet in our solar system in their order from the Sun-Mercury, Venus, Earth, Mars, Jupiter, Saturn, Uranus, Neptune, and Pluto. But this won't work anymore, because Pluto has been demoted.

So what the hell does this mean? Pluto isn't conjoined to what had been it's moon, Charon, so isn't it then in a clear neighborhood? Whatever. I'm not going to sit here and pretend I am any sort of expert-the experts are already hotly debating this issue. Only 424 out of 10,000 astronomers around the world voted on this decision, so the validity of this vote and it's severe lack of majority are being questioned.

People are not happy about this demotion from Pluto the Planet to Pluto the Dwarf Planet. Dwarf Planet being a silly title in itself, because a dwarf planet isn't even a planet. It comes as no surprise that the September 1st protest at New Mexico State University was joined by the wife and son of Clyde Tombaugh, the man who first discovered Pluto in 1930. I'm sure I would join the picket line if less than 5% of the world's astronomers decided that my dad had actually discovered a dwarf something or other.

I too am unhappy about this demotion. I liked Pluto. I liked being served nine pickles. It seems like now, this little planet who was way out there, trying to hang on and be part of the group has just been kicked out of the treehouse like some annoying little brother. Granted, our solar system is a very exclusive clique with some very cool members (like who isn't intimidated by Saturn's coolness? And you squares can just forget about being invited to Jupiters kegger!), but is going down from 9 planets to 8 really going to make our lives better? And what message does this send to the little guy? "Sorry little dude, 5% of us decided that you just aren't good enough so scram and don't let the stars hit your ass on the way out!" Real nice attitude, International Astronomical Union. Or should I say, International Couple of Guys who Hate Pluto!

But then again, I suppose we do need rules and definitions for celestial bodies. Otherwise all of those filty asteroids would want to be planets too, stupid mynock-filled wankers that they are. 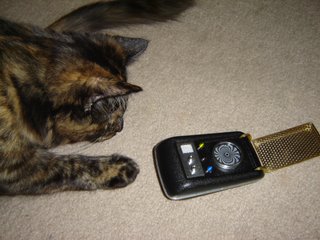