Geeks & Gobbles
Thanksgiving weekend was quite the good time this year. We spent the actual day at my parent's house. Dad was craving turkey this year, so we put the Chinese food tradition on hold and had a traditional spread of turkey, dressing, mashed potatoes, cranberries, the standard drill. We brought Jess-Belle with us, and she was pretty good, considering that this was the first time my parent's had a visit from their grandkitty. She pretty much sniffed everything over and over all day, and only got up on the counter twice. She had a new toy, a laser pointer, so we were able to keep her busy while the turkey came out of the oven. I have a new respect for parents after trying to travel with the cat. After packing the catbox, her food, some toys, I started to think that parents of human babies have to pack like this everywhere they go! Yeesh! After food, we played some games, then fell asleep until my good pal Steve stopped by. He hung out for a few hours before needing to get back to his family's house and sleep, as he had begun his drive from Chicago at 3am that morning. Ouch!

Chris had some work to do Friday, so Mom and I drove to Kettering to visit family friends. My friend Sara and her son Gavin were visiting from Toronto, and her friend Kristen was visiting from New Jersey. Kristen and her mom Sherry came over to Sara's mom Debbie's house where we caught up, ate leftovers (specifically Debbie's homeade pecan pie which is the most heavenly pie of all time), but saved enough room so we could make a stop at Sonic for a cherry limeade. We also came home with Gavin's cold, but we didn't know that until Sunday afternoon. Saturday and Sunday were all about the Con, and since I worked Saturday and spent Sunday reading the Twilight Zone comics I bought, I'll let Chris tell more about it.

Saturday I packed up my artwork, some pencils and markers, and a box of comics and headed off to the Mid-Ohio Con. This is practically the only convention I do professionally anymore, and this was the fourteenth or fifteenth year I've attended as a guest. I was busy for the entire convention, signing comics, selling artwork, and sketching and chatting with fans and a few friends. Xan joined me on Sunday, spending time out on the con floor shopping and catching up with friends Nebbie Brown, Steve Swanson and Chris Collier before the symptoms of her cold started to manifest and make her miserable. She also helped at my table and gave much needed moral support and fetched much needed Mountain Dew as I started to burn out in the afternoon.

Throughout the show I ended up talking music almost as much as I did comics, discussing the recent Robyn Hitchcock show with Dave Aikins, gushing over Velocity Girl with a fan who showed up in a VG T-shirt, and trading stories about R.E.M. and Paul Westerberg with Aubrey Stallings. I met Aubrey at my very first signing as a professional comic artist, and he's easily one of the nicest people I've ever known. We hadn't seen him in a while, so when he showed up, it was the highlight of the weekend!

The next convention I have scheduled is the Emerald City Comicon in Seattle in March. HERE is a link to the show's website. Some of my comic book creator heroes will be guests there as well--Michael Golden, Howard Chaykin, Paul Chadwick. Best of all, Xan will be going with me, so this has all the makings of a really good time!
--C & X 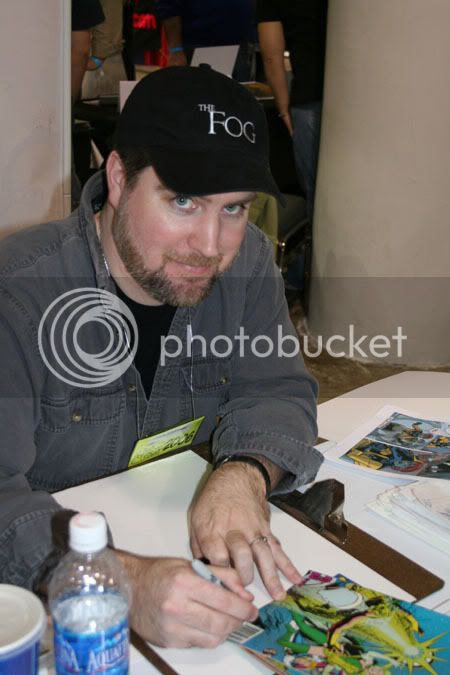 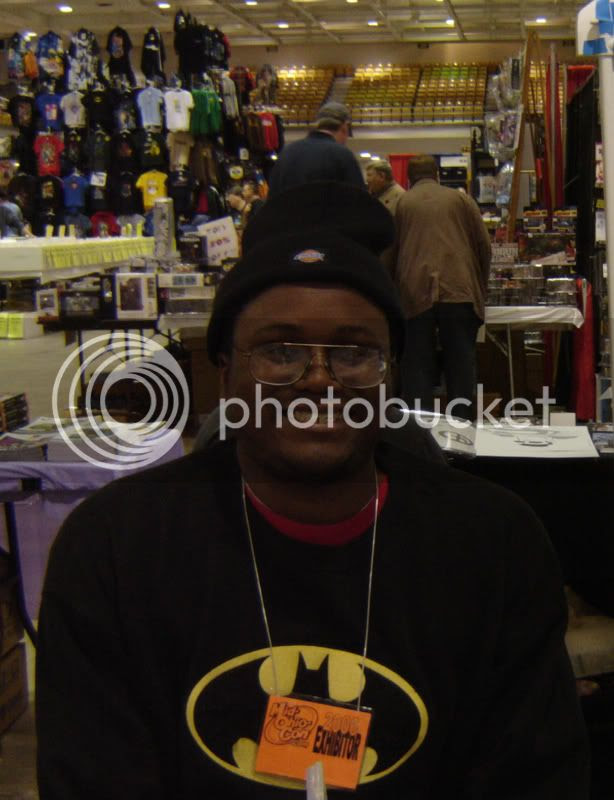 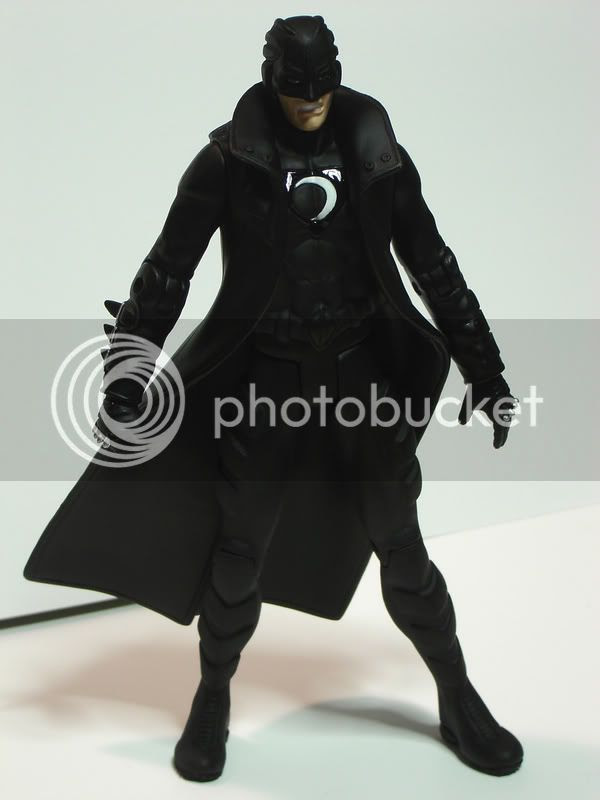 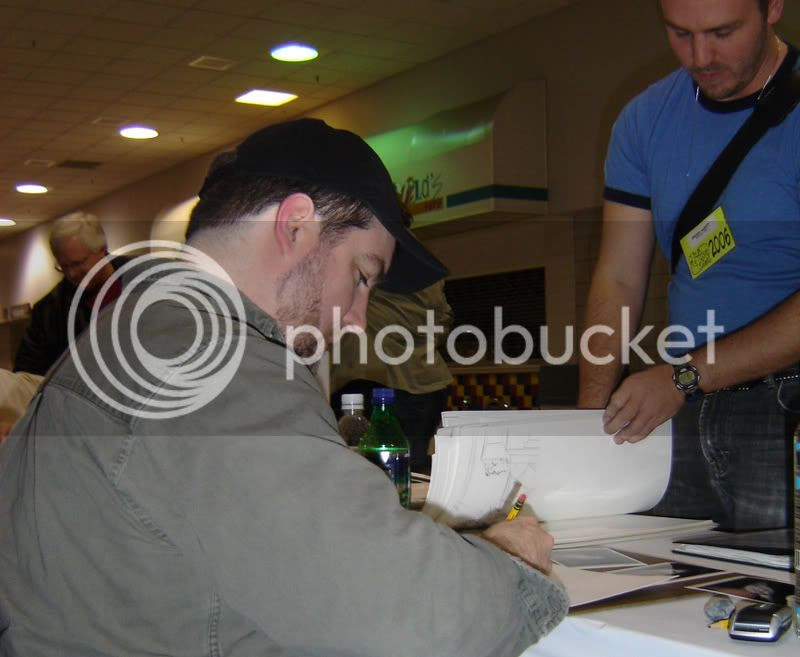 Click HERE to be taken to a Newsarama.com feature on Mid-Ohio Con, the source of the first photo above
Posted by Chris & Xan at 12:18 AM 3 comments:

Cleveland Alterna-Rocks!
On Sunday, Nov. 12, we headed up to the Beachland Ballroom in Cleveland to see Robyn Hitchcock and the Venus 3 perform. The Venus 3 is Scott McCaughey from the Seattle band The Young Fresh Fellows, Bill Rieflin from Ministry (and the current drummer for R.E.M.), and Peter Buck, founding member of R.E.M. I'm a big Robyn Hitchcock fan, but anyone who knows me well knows that I'm a REALLY big R.E.M. fan.

So...we arrived in Cleveland early and decided to do some record shopping at the Music Saves record store next to the Beachland. I had heard that bands playing at the Beachland sometimes do signings at the Music Saves, but the store was empty when we stepped inside, so it looked like it would just be your average everyday alternative music store experience. As I was browsing through the bins, I heard a customer come in, then felt Xan elbow me in the ribs. I looked at her and she nodded at the guy thumbing through the vinyl selection--holy socks!--it's Peter Buck! We'd pretty much finished our shopping, but we stayed just a little longer. Not wanting to intrude on the guy's personal time, we eventually slunk out, hoping the band would stay after the show to meet and greet fans. Starstruck? You bet! If there is a soundtrack to my adult life, Peter Buck esentially composed and performed it. I plan to write at length sometime soon about R.E.M. in a future post, by the way, but for now, let's just leave it at that.

Anyway, we still had some time to kill, so we headed over to Coventry and shopped at Big Fun, a cool store full of every toy you ever owned as a kid--every Major Matt Mason, Strawberry Shortcake, G.I. Joe or Mego figure--and every conceivable novelty from floaty-pens to boxing nun hand puppets and retro 70's iron-on T-Shirt designs. I usually spend most of my time in Big Fun annoying Xan by gasping and pointing at things and saying "I used to have one of those!" We made some completely frivolous purchases of Krazy Kat action figures and Pee-Wee's Playhouse trading cards.

7PM rolled around and it was off to the show! We were there early enough to get a table, but we later decided that we would rather stand closer to the stage. So we grabbed our drinks, (the Beachland sells orange Crush in glass bottles, which excited Xan quite a bit as she had to work the next morning and had not wanted alchohol) headed up to the stage and ran into Dave Aikins and Andy Bennett, fellow comic pros. We talked to them until the show started. The show, despite Robyn Hitchcock's thrown out back, was amazing! In a nearly two hour set, the band played oldies stretching back to Robyn Hitchcock's Soft Boys days (which had Soft Boys fan Scott McCaughey grinning from ear to ear) and ran through some really good new songs before ending with some covers of songs by Syd Barrett, Bob Dylan and the Beatles. Since we were in the front row, I couldn't resist snapping a few flashless photos as unobtrusively as I could during the performance.

In the lobby of the Beachland afterwards, the band did indeed meet and greet the fans and we were able to have them sign some LP's we brought with us as well as a poster for the concert that a Beachland employee was kind enough to let us have. Xan asked the surprisingly approachable Peter Buck about his earlier record store purchases and talked him into posing with us for a photo. 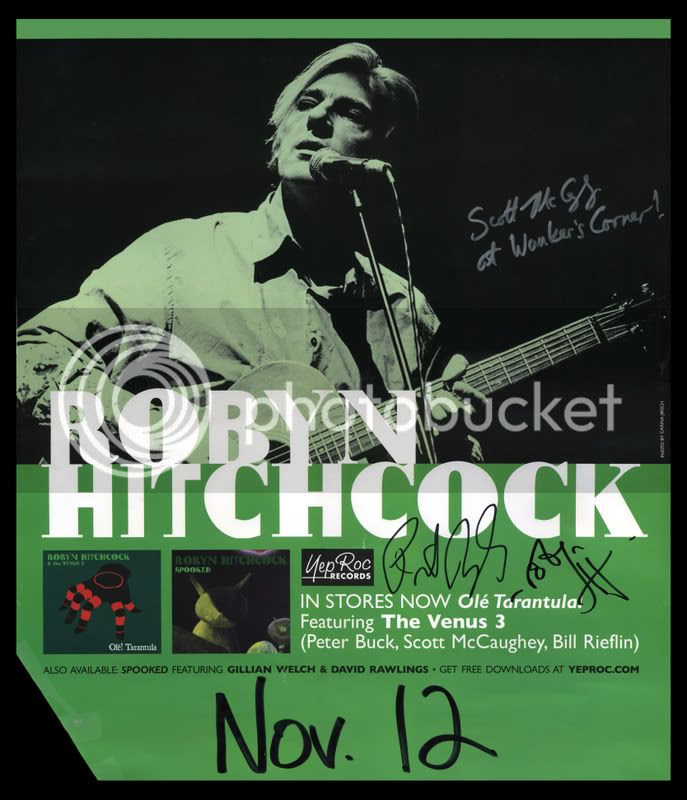 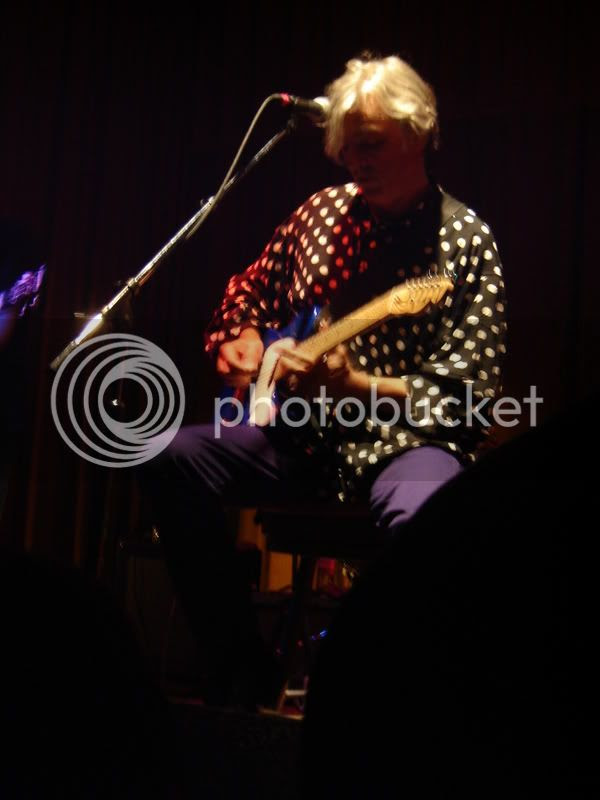 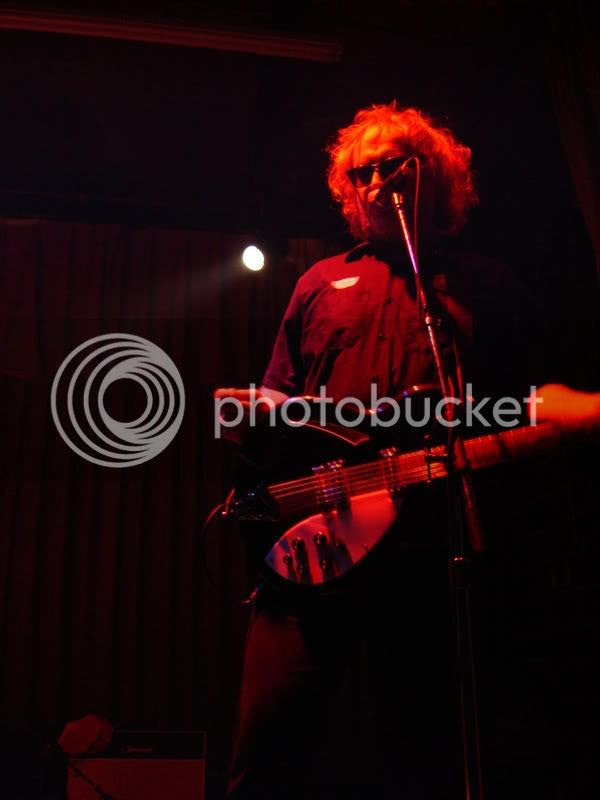 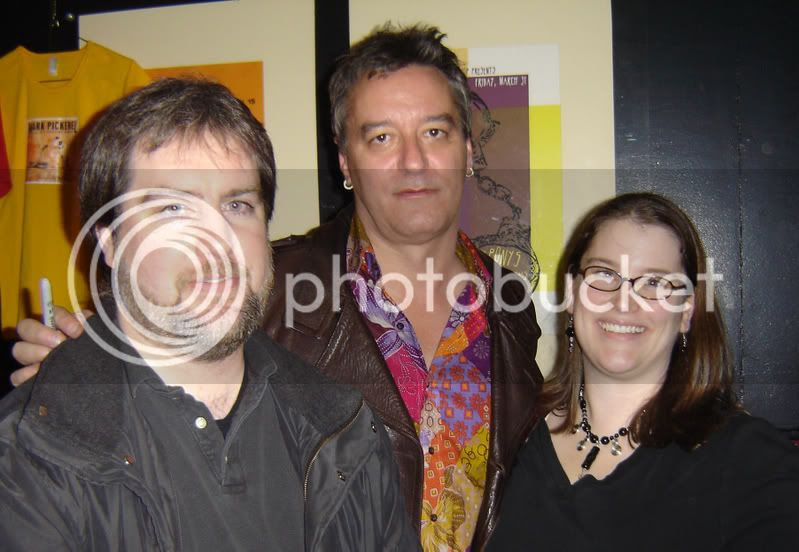 One More Midnighter Thing For Now
This morning Karl Story sent me his inked version of the page from Midnighter #2 that i posted yesterday. If you've ever wondered exactly what an inker can bring to a page of comic art--what makes a good inker invaluable, see below. Wow! Thanks, Karl!
--C 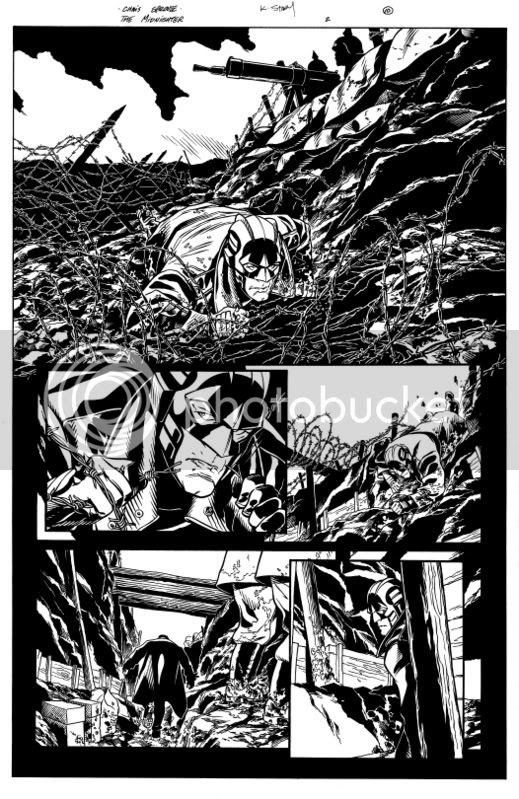 Reviews
In the comments section of my last post, my friend Leighton gives a link to a review for Midnighter #1 (thanks, Leighton, and thanks again for trying to sell some comics for me!). Fortunately it was a good one--I had sworn off reading reviews because they can depress me or even anger me and rarely if ever had any constructive criticism, but I've read a few for this book because I was anticipating a little controversy and was too curious to resist.
I have to say most reviews have been favorable, but a few have been vicious(one guy writes about how I've lost it and am too lazy to draw detailed backgrounds anymore--nevermind that this book took place in a desert and a featureless metal cell & corridor...) and a few have just missed the point, dwelling on either Midnighter's sexuality not being featured heavily enough or how the subject has been dealt with in a clumsy and heavy-handed way. The award for missing the point the most, however, goes to the internet pundit who was outraged that--according to him-- Midnighter killed U.S. troops in this issue(for the record: he killed a caucasian mercenary--no U.S. flag or anything similar anywhere on his fatigues--and destroyed some tanks being used by unscrupulous local chumps taking advantage of a de-stabilized Afghanistan to work out old tribal grudges...no American soldiers or patriots or even Republicans were harmed in the making of this comic book).
...I guess it's kinda obvious I'm letting 'em get to me again! So...I'm going to start avoiding reviews again and continue trying to just draw as well as I can and tell stories to the best of my abilities. That's why I got into comics, after all.
As for what the Midnighter comic and character are all about, I'll let someone more capable and qualified talk about that: HERE is a link to an interview with Midnighter writer Garth Ennis(actually it's kind of a press release, I think, which is being used all over the place--Xan & I read almost the exact same text in a UK fanzine in Forbidden Planet in London).
--C 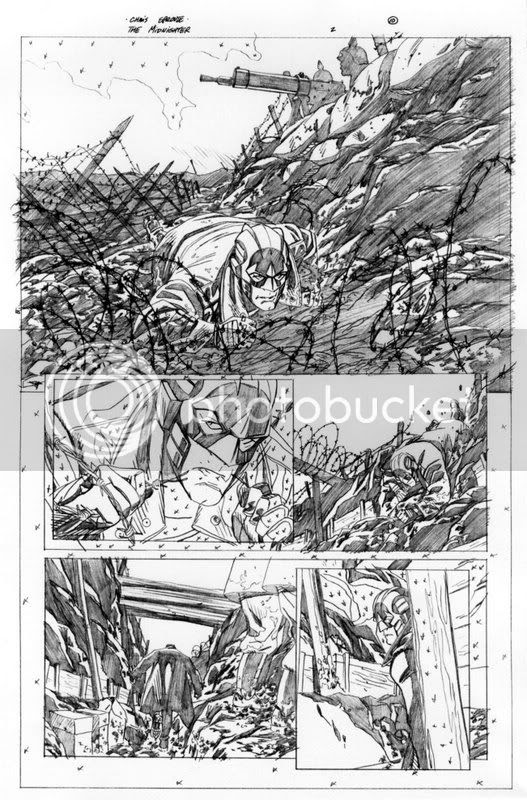 Here's a small preview of Midnighter #2--my favorite page from that issue, in pencillled form. Too bad I'm too lazy to draw detailed backgrounds anymore or this would have been a really cool page...
Posted by Chris & Xan at 7:43 PM 3 comments: