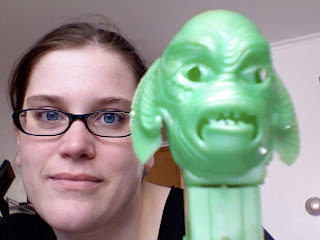 Okay, my new photo? That was one of my birthday presents! My holy grail of Pez collecting, the Creature from the Black Lagoon! I cried when I saw it, as I have wanted this for like a decade. Chris gave me 30 other Pez, one for each year, and they are all great. Japanese mini Nintendo, Ultraman, frogs, a Jungle Book set, the Crazy Animals (all European releases) an E.T., MGM set (Tom, Jerry, Droopy, Spike) and an Earth from the Planet series. We are getting ready to go out so I can get more shelving for my new Pez. I collect Pez. Just in case you haven't been to my house. Because I collect Pez, this is like the best gift ever. Seriously. I can't believe I actually have a Creature! I am like a little kid, I won't put it down. If it weren't so delicate, I would probably sleep with it.


That last bit was written on my acutal birthday. It is now a couple of weeks later and I still cannot believe Chris got me a Creature! Since he is so old (The Creature was not manufactured after the 1960s except as The Fishman which really doesn't hold a candle to the Creature and the glory of his pearlescent stem. Sorry, no more Pez history lesson!) he does not have the usual "feet" that you see on Pez dispensers these days. The feet make them easier to stand up, and the ones without feet topple easily. So instead of displaying him on my Pez shelves, I put him in a shadowbox with a Creature From The Black Lagoon movie poster. It looks super cool, and he is well protected. Like I said, for me, he is the holy grail of Pez collecting.

As well as opening mad cool presents on my birthday, my friend Shelley came for a quick visit on her way to see her family in Southern Ohio. She arrived around 10 the night of my birthday, then we spent the next day just hanging out, record shopping, our usual. My gift from her was the Criterion edition of Slacker, which is fantastic. I always forget how good that movie is until I see it again. Some people swear by Dazed and Confused, I am a Slacker follower. Both are Richard Linklatter, so you really can't go wrong either way.

Shelley left to see her family Friday afternoon, and Friday night was the traditional Spaghetti Warehouse dinner with my parents and Juice. I went there with my oldest dear dear friend Lydia the year I turned 9, and we have been going ever since. Presents from Mom and Dad included an iTunes gift card and cash. Still deciding how to use the gift card, but the cash is gone. Spent on an eye massager and a Wii. More on the Wii later.

The weekend following the Thursday that was my birthday was S.P.A.C.E., the Small Press and Alternative Comics Expo. For those of you who have never been, think like APE or SPX or MOCCA. For those of you who still have no idea what I mean, it is a comic convention for independant comics and self publishers, web comics, the indie scene of comics. Always fun, and I always get a lot of fun new stuff. My friends Steve and Bret (the old roomies) came from Chicacgo for the event. Steve does an amazing self published comic called Saki the Panda, which can be checked out at www.myspace.com/awkward____pause. That's 4 underscores, or you can find him on my friends page as Pandaman. Bret's girlfriend Crystal also does a comic called Lucille Brawl which she was selling at the show. I had not met her until she came out here for S.P.A.C.E. and I just loved her. She's also on MySpace as Lucille Brawl. Her roommates Cassie and Evey (I think I spelled those right!) also came along, and we all hung at my house Saturday night and went to the convention (hung over, all of us) Sunday. I once again spent Sunday reading comics. All in all, a fantastic birthday week. And I didn't even mention my carrot birthday cake. Those bakers at Whole Foods, they do some nice work.
--X
(Reprinted with Kind permission from Xan's MySpace page)
Posted by Chris & Xan at 9:51 PM

You could always buy the season pass for Supernatural or the Dresden Files (or another tv show)with your iTunes gift card!

You are pretty unique creature yourself, Xannie! Love and kisses from cyberminneapolis.

There's nothing quite like getting the holy grail of collectibles for one's birthday! Glad that worked out for you, Xan. Now we just need a picture of this Pez collection for your blog, so that we can all bask in its glory!

not a bad plan, neil. this would give me a reason to display it all, not just keep it in a footlocker in the basement!