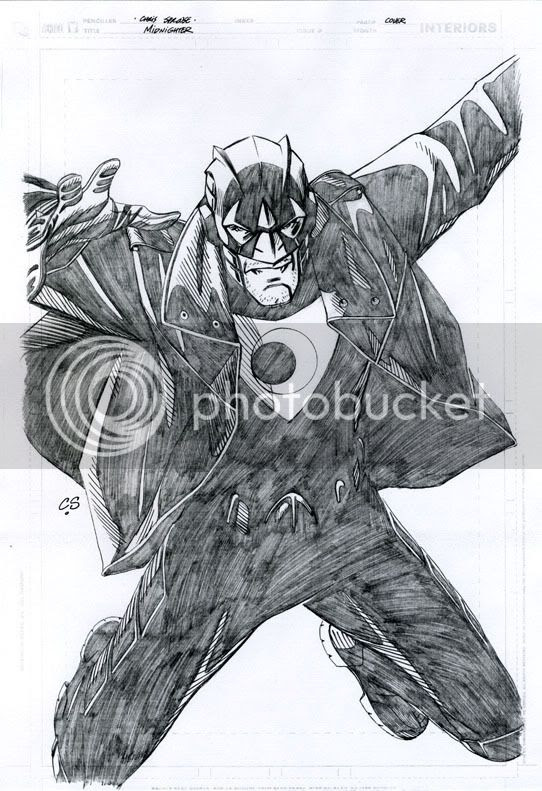 Just a quick one this time: I'm working on future Midnighter covers. We have a new writer on that book, but I'll wait for some sort of official announcement before I say who it is--no big secret deal or anything--I just want to wait until all the papers are signed and everything's nailed down. Also, the Walter Simonson Spirit story is in, so I'll be starting that this week.
--C
Posted by Chris & Xan at 12:09 AM

So Chris, are you really digging on the Midnighter character or he a guy that you're working on to just pay the bills? Perhaps this a question to be asked privately, and the reason I ask is that I've never been a huge fan of Midnighter- until you started drawing him of course. Just curious what you think.

Well, I am digging this book and this character. Back when I was working on the Wildcats/Aliens book, I started reading Stormwatch and a bunch of other work by Warren Ellis, which led to the Authority which I REALLY enjoyed. Obviously, that's where I first encountered Midnighter, and I found him to be pretty interesting. Never thought I'd be working on Midnighter solo stories because I've been typecast for so long and I suspect no one thought I'd be any good at this kind of comic. One of the main reasons I took on the assignment was to show that I could do something other than what everyone seemed to expect from me. As for paying the bills, I've definitely taken jobs just to have work, but I never hack out a job just to get it done--my life would be so much easier if I did! I put my all into whatever I'm working on. Lately, I've been working with such good writers, and I don't want to let them down. I'd hate to get lazy and have Walt Simonson or Warren or Alan Moore think I was a chump!

No, you would never want to seem the chump, especially to those guys!

I guess the intent behind my question was to discern your level of interest in the character overall, which you illuminated for me. Did you also take on projects like New Men because you developed a vested interest in the characters, or was that one of those jobs that you took to pay the bills? If I remember correctly you were only on the book for a few issues, and how invested could you be in those one notes characters anyway? Although you did your best to make me care about them.

Personally I think the projects that have showed (to the casual observer fan that is) an intense level of investment by you Chris, would be Tom Strong, Ocean, Supreme, and now Midnighter. Granted I love books like Hammerlocke and LOSH simply because they were your first, but you didn't really start to blow my doors off until Tom Strong. Can you tell it's my favorite of your works thus far?! ;-)

Actually, I was REALLY into Legionnaires! We all had such high hopes for the book. I was a Legion fan and getting that assignment was a dream come true. It now looks strange to me, like someone else drew it, but at the time I was pouring my all into it. But, yeah, the books you mention were the ones that meant the most to me, although I have to say that Hammerlocke will always be kind of special because it was the first project to I drew professionally.

I remember when Hammerlocke first came out and I took notice of your style Chris, it was a revelation. It wasn't all hard edges, grunting ferocity, and oversized weapons (well maybe a few, but always with a point). You had an almost animation quality (very bouncy) look to your work and I loved how pretty your women are. Granted, all of your human faces have a similar style template, but I've always thought they look best on your females.